The fourth cane price estimate is expected to be sweeter than sugar. In June we reported that the fourth estimated average cane price for the 2022 crop was fifty-nine dollars and seventy cents per ton cane. This was an improvement from the third estimate due to a combination of factors including an improvement in the estimated price for EU raw sugar, US raw sugar, CARICOM DC sugar, export molasses price and a slight improvement in Ton cane per ton sugar. But the price just got a bit sweeter because as BSI’s Cane Farmers Relations Manager, Olivia Carballo-Avilez, the sixty-dollar mark has been reached. 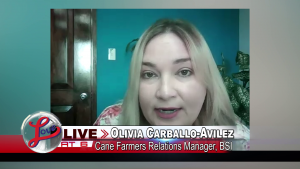 Olivia Carballo-Avilez, Cane Farmers, Relations Manager BSI: “Our estimate for cane price is upwards of 60 a bit in some sense over $60 and we’ve made it to the 60 range this year. As I said, this is the highest it has been since the changes in the E.U. market where we lost preferential prices and we’ve now been competing with global prices. But not only has the global raw sugar prices increased but we’ve also managed to add to that because of our investments, because of our projects, the Direct Consumption Sugar Project, we’re now producing 50% of the sugar in higher value-added sugars that contribute better to the cane price. Last year it was around $3.27 more than if we had sold that same amount of sugar in raw. This year we’re looking at around the same numbers and improvements as well and now the Big Creek project will also contribute to a better cane price.”