Belmopan residents joined members of the security forces on a 5K run to commemorate National Police Week. The event was organized by the U.S. Embassy in Belmopan and its Regional Security Office and concluded a week-long initiative which pays tribute to fallen law enforcement officers. Kirt Heim, Regional Security Officer of the US Embassy, spoke about the importance of recognizing the work and commitment of officers in keeping communities safe. 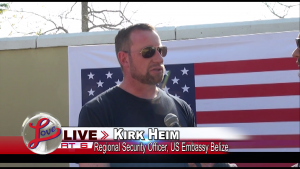 Kirk Heim, Regional Security Officer, US Embassy Belize: “The Jungle Run is something that we’ve had for a few years but what we did a little different this year was put it in conjunction with National Police week that’s hosted in th United States annually and it’s to honor the fallen law enforcement officers around the world. So specifically we’ve joined together and with our colleagues here in Belize and put this event on. So every day our men and women in law enforcement some of us don the uniform go out in public and support in keeping our community safe and it’s important to recognize them for the work that they do and the selflessness that they put their lives on the line daily.”

Participants included personnel from the U.S. Embassy, the Police Department, the Belize Coast Guard, and the Belize Defence Force.