The ninth Summit of the Americas concludes today in Los Angeles, California. Prime Minister John Briceno is heading the Belize delegation. On Thursday, PM Briceno addressed regional leaders in what the NYTimes described as a remarkable speech. In the article, the NY Times reported that Briceno publicly chastised President Biden in a remarkable speech just moments after the president had left the lectern. Briceño said it was “inexcusable” that the United States had blocked Cuba and Venezuela from attending the summit, a decision that sparked the boycott by four countries. Briceno also featured in an article published by Reuters which reported that shortly after Biden’s speech that extolled the virtues of democracy in the region, Briceno, criticized the exclusion of Communist-ruled Cuba and leftist Venezuela, calling the “illegal blockade against Cuba” an “affront to humanity.” “In fact, it is un-American. The time has come, Mr. President, to lift the blockade,” Briceno said, upbraiding Biden as he sat only a few feet away. Also on Thursday, PM Briceno met with the US Under Secretary of the Treasury for Terrorism and Financial Intelligence Brian Nelson. One of the key topics discussed was financial inclusion. Our colleagues at Southern Belize Media spoke to Nelson. 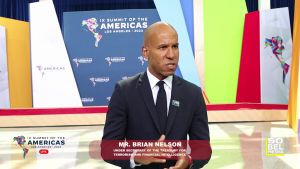 Brian Nelson, Under Secretary of the Treasury for Terrorism and Financial Intelligence: “Financial inclusion and the issues around derisking is something that the treasury department has been focused on for a number of years and appreciate Chair Water’s leadership on this issue as well. Among the things that we’re doing is continuing to talk to financial institutions about having a really risk based approach to how they assess different jurisdictions so it’s not a broad approach it’s really based in the risk that they see. The United States Government obviously cannot tell private financial institutions that they have to operate in any particular jurisdiction but what we can do is help financial institutions through banking dialogues come together with government leaders in the Caribbean and other parts of Latin America to have a discussion about how to build relationships and also build strong anti money laundering and countering financing terrorism programs within thier financial institutions.”

Nelson explained that much of the discussion focused on correspondent banking.

Brian Nelson, Under Secretary of the Treasury for Terrorism and Financial Intelligence: “We had a good engagement on sort of the sense that there are more opportunities to develop correspondent banking relationships in Belize and throughout the rest of the Caribbean. There is no blacklist that Belize is on. Indeed I was able to talk with the Belize delegation about the work that they’ve done just in the last year on doing the national risk assessment to identify gaps in their anti-money laundering regime and the main gap that they identified relates to beneficial ownership and understanding who is the true ownership of a corporation which is a gap that we have here in the United States that my office is working to fill as well. So I think there’s just a lot of opportunity to continue to identify potential risks but also work on other issues like development financing and other things that the treasury department is also committed to supporting and the entire effort by the Biden-Harris administration.”