A dispute between neighbors in Guinea Grass Village, Orange Walk District led to murder on Good Friday. Thirty-year-old Jose Miguel Cedillos was shot and killed around four o’clock in the afternoon while relaxing with his family. The killer is believed to be Nelson de Jesus Segovia who remains wanted and on the run tonight. Reports suggest that Segovia shot and killed Cedillos over a dispute for five dollars. ASP Fitzroy Yearwood explained. 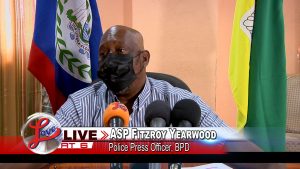 ASP. Fitzroy Yearwood, Police Press Officer, BPD: “Investigations reveal that Cedillo entered a yard and was asking for a $5 that he claimed two sisters had for him. The two women ran into their house and they locked theirselves in, securing themselves. No? We know that when he was walking away from that yard, he threatened a young lady that was in that yard, a lady Daisy Pott, 27 years. A few minutes later, after he left the yard and went to his home, Nelson Segovia, 27 years old, the common-law husband of Daisy Pott went to his home and threw two rocks at the house. When he came out to respond to his assailant, three shots were fired at him, all hitting his target and he was transported to the Northern Regional Hospital where he was pronounced dead. We know that Segovia is wanted in connection with this murder. To be honest with you, and this is only my opinion, tempers flare when people believe that they are being threatened but in this case, Segovia was not being threatened. He had a, he was threatening the woman, Daisy Pott, and Segovia took matters into his own hands. 1. He left that yard and went to his own yard. The proper thing for them to have done was to call the police. By you going to that person and aggravating that person and that person coming out, you, that had to be premeditated. So for you to draw that weapon, there is no excuse. Especially, I don’t care if that person harassed you a hundred times or harassed someone you love a hundred times, call the police a hundred times. Call them a hundred and one. The minute you take matters into your own hand in this manner, there is no excuse for that. He did not pose a direct threat at the time when the murder occurred.”