Belize City police are tonight trying to figure out who murdered thirty-three-year-old Carl Reneau.  Reneau was on Faber’s Road Extension when he was targeted by a lone gunman yesterday afternoon.  The victim was riding his bicycle when he was approached by the shooter who was dressed in grey clothing.  He was rushed to the KHMH where he succumbed.  But Reneau was no stranger to the law.  He had a long rap sheet of serious crimes including a murder for which he was acquitted.  So did his past catch up with him?  Reporter Giovanna Moguel found out more.

A Monday afternoon shooting on Faber’s Road Extension in Belize City left thirty-three-year-old Carl Reneau dead.  According to Reneau’s sister, Kiwana Williams, her brother had just left their house to buy food.  Not too long after leaving their house, she heard gunshots.  Williams believes the gunman was lay waiting her unsuspecting brother. 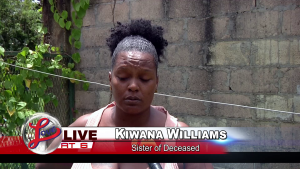 Kiwana Williams, Sister of Deceased: “I think it’s a retaliation that happened. They had this all planned because when my brother was ambushed yesterday he just left home he was heading out to purchase food and that person probably was dodging him in the bushes.”

Williams says that eyewitnesses told the family that they saw a masked man in full gray clothing flee into the nearby bushes.   She says had the police pursued the lead, the culprit could have been apprehended.

Reneau was the youngest of nine siblings.  His murder hits the Reneau family hard, especially Williams, who had been with him just moments before the fatal incident. Williams explained that the family just wants peace.

Kiwana Williams, Sister of Deceased: “The streets are gonna talk. We have an idea more or less who it is but from what we’re hearing this person did not pull the trigger he sent some family member to do it but we don’t want any – we’re not going to retaliate, we just want peace. We’re not into violence anymore. I wasn’t into that from the beginning. We want to bury my brother in peace whenever the post mortem is finished we’re gonna try and bury my brother as soon as we can. You know you guys need to stop the gun violence in Belize. Belize is too small for all these senseless killing. That doesn’t make any sense, what do you guys get out of killing each other ? You know black man bringing down black man ?”

Reneau had several past run-ins with the law.  In 2017 he was arrested for shooting fifteen-year-old Jaheem Mahler on Iguana Street, in 2013 he was charged for allegedly stabbing Delroy Matura and was accused in 2008 for the murder of Brian Williams.

Kiwana Williams, Sister of Deceased: “You know everybody has their past and my brother was trying to change his life with the encouragement of our family especially me because I was always on his back about changing. I told him brother stop going to jail he said sister I’m not going to go back I’ve changed my life. I said thank God. Out there he’s a monster but to us he is loving. He was an uncle, a brother, he and his niece and nephew would always get in arguments but the argument will always have us laughing.”

Reneau leaves behind five siblings and he did not have any children.  Police are still investigating his murder. Giovanna Moguel for Love News.