While the MLA claims that GOB ambushed them with the approval of the Free Prior Informed Consent (FPIC) Protocol, Minister of Natural Recourses Cordel Hyde says otherwise. Earlier today, Hyde who is the acting Prime Minister told Love News that the government was involved in various rounds of consultations with the Maya Communities.

Cordel Hyde, Minister of Natural Resources: “That has to be concerning because my impression has always been that we have been engaging with all the Mayan communities and the FPIC protocol has been on the table for a long time and in fact the CCJ castigated us, scolded us back in July I believe to insist that we had to get this done because it had been languishing for years and years and so I think it was with that in mind that we have escalated our efforts to get that before the CCJ and I think Cabinet just recently approved a draft protocol that is to be presented to the CCJ. My understanding is that that protocol has gone through very extensive ventilation and consultation with all the Mayan communities. Some a little taken aback but I don’t have all the details. I haven’t heard what the Mayan leaders had to say so I would pretty much leave it at that.”

Cordel Hyde, Minister of Natural Resources:  “Um, that’s a strong word. We’ve been through, I know, extensive consultations that’s what I will say. Maybe not enough consultations, maybe we needed to do more. I don’t know but I know this did not happen in a vacuum. There’s been a lot of discussions but perhaps we could have done more. I don’t, I can’t say much more than that other than I know that there’s been a lot of discussions along the way. “

Officials from the Ministry of Indigenous People’s Affairs will be meeting with Maya leaders this weekend. 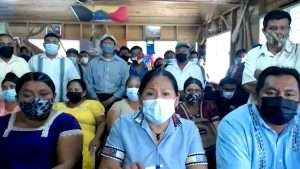