Another police officer being investigated is Police Constable Alicia Trapp. She’s the officer, who now stands accused of aggressing Minister Julius Espat on June 5 during the Teakettle Village Council elections. She took to social media to say Minister Espat assaulted her and the Commissioner of Police, Chester Williams, has shared what he says is evidence that Trapp committed the very offence she’s accused of. More than that, she is also accused of violating the Police Department’s social media policy. While no final decision has been made in her case as yet, a letter of complaint has been issued. Senior Superintendent Calbert Flowers indicated that Trapp continues to work, despite the allegations. 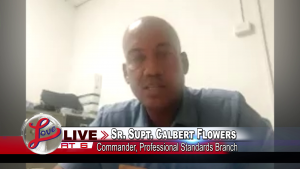 Sr.Supt Calbert Flowers, Commander, Professional Standards Branch: “The matter is under investigation. Ms.Trapp likewise has been served with notice of complaint and a letter for her to give explanation of her actions after which again disciplinary charges will be laid against her in the matter with Alicia Trapp the breach of discipline in that case is the breach of social media policy that is the angle that we are investigating.”