Appearing on The Morning Show today was the non-resident Ambassador for the European Union to Belize, Marianne Van Steen along with the Deputy Managing Director in the Americas for the EU, Javier Perez. The discussion ranged from the impacts that the union has in the region as well as the availability of funding and the current invasion of Ukraine. As it relates to the war, Ambassador Van Steen expressed appreciation for Belize’s stance against the war and spoke on the current sanctions against Russia.

Marianne Van Steen, Ambassador for the European Union to Belize: “ I came here a couple of weeks ago and that was on the day this unprovoked war was started by President Putin so I remember very well, I woke up in the morning and we were all shocked. I don’t think that we saw it coming, not in this way. I think this war is an assault against everything we stand for and when I say we, I mean the European Union but I also mean Belize. So one of the reasons, you know, I’m back here in Belize, you know I’m not a resident, is because we saw the support we got from Belize in the United Nations, in the statements of the Government in CARICOM and we very much appreciate that and that’s why I’m here again in Belize and this time accompanied by the Director for the Americas from Brazil who came all the way over here and to express also the gratitude that the European Union has for the support of this country. I honestly think it’s the very time in history that we have seen and we are seeing the effect of sanctions so clearly. We prefer economic sanctions over war, that’s obvious, and the idea is that in the end, President Putin will not have the economic resources, the means, to continue to do what he’s doing, which is breaching the entire International Rules Based Order and yes, we’ve been actually even ourselves surprised that we’ve been able to adopt such an immense package, I mean, such a far reaching package of sanctions. Not only our member states in the European Union but many of our allies have done the same and also the private sector has come in and this is really something we have never seen before and we very much hope that that is going to be a way to stop this really terrible war.”

Javier Perez, EU Director of the Americas: “ If I could briefly complement what Marianne just said, I think that again, on sanctions, one reason why we think this could work is because of the significance of those sanctions. They are very wide in scope. We have now 654 Russian oligarchs and those close to Putin have been sanctioned. Those sorts of Russian entities have also seen their assets frozen in Europe. We have also sanctions that have limited their capacity to travel to Europe, those 654 people I was referring to. We have specifically targeted elements of the Russian industry where we think we can be particularly effective. I’m thinking about dual use goods. I’m talking about transfer equipment especially in the aviation sector, this is gonna hit them quite hardly. We also have targeted the financial assets of the Central Bank in Russia. So I mean it’s quite wide and it’s quite significant in what it can reach but let me remind you that we are not the only ones applying sanctions. The response of the international community was very significant and let me give you a very excellent example. Singapore which is a country that takes pride in neutrality and normally not getting involved in *inaudible* has sanctioned many Russian oligarchs and has sanctioned Russia. Let me give you another example. Switzerland, which is a country that prides in its neutrality and has done so for the last 60 years, Switzerland has agreed to send weapons to the Ukraine. This is, like I said, a completely unprecedented and significant reaction not just to the Euro, just to the US but to the whole of the international community towards Russia.”

With a meeting held earlier today with NATO officials, EU’s Director, Javier Perez, spoke on what are the expected outcomes of today’s session.

Javier Perez, EU Director of the Americas:  “I think that today two things will happen and first of all I think the meetings between Brazil and Biden and his counterparts, both in NATO and the EU, will show again the solidarity of practically the rest of the world towards the Ukraine and the opposition of practically the entire world towards what President Putin is doing. So it will be again a display of solidarity towards the Ukraine and the second element is it will also highlight the like mindedness and the solidity of the links between the EU and the US. This will be a unique opportunity in that President Biden will be joining, physically, the meetings of the EU Heads of State, the what we call the European Council. Secretary of State, Blinken has visited now Europe on multiple occasions, now President Biden and I think this shows again that one of the silver linings, if I may say so, of this conflict, is that it has further reinforced our ties, not only to the US but also, as Marianne said, with the rest of the world. We have collectively shown a very strong response to what Putin has done, not just politically but also financially through sanctions, also through a display of solidarity towards Ukrainian refugees and I’m sure that the European Council will further look into how to help Ukraine from a humanitarian point of view, from a financial point of view and from a political point of view. As an example, and I’ll stop here, let me tell you that Europe has already agreed that every single Ukrainian coming into Europe will be given temporary protection status, this is something that is unprecedented and is all the more remarkable given the amount of refugees we expect. We reckon that it could be up to 6 million or even more Ukrainians coming into Europe over the next few months.” 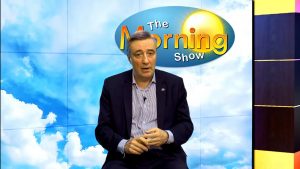