A vicious chopping took place in Concepcion Village, Corozal on Sunday morning. It’s an incident that has left one person dead, a second in the hospital and a third in jail. More than that, it is a malicious act, which has left a community gripped with fear. Dale McDougall and videographer, Scott Tillett were the first on the scene to find out how the violent crime unfolded in the northern agricultural community on that windy day.

Dale McDougall, Love FM Belize:  The windows and doors of this home are locked. There is even a padlock on the main entrance but this at 11:30 on Sunday morning was the scene of a heinous crime in the village of Concepcio in the Corozal district. Police say that 47 year old Juan Arturo Mendez and his cousin 40 year old Wendy and a third person Germain Zuniga were drinking as evidenced by these cans and bottles all over the property. But late on Sunday morning loud voices, empty bottles and threatening words were hurled. It was those sounds this resident heard. For his safety and that of his family he asked not to be identified.

Witness 1: “He started about 12:30 or so when we heard some noise outside from the neighbor when they start banging on door and window and we saw a man out there with stones and sticks trying to get into the house but it looked like somebody had closed the door so he couldn’t come in because after he broke the window he was throwing stones in the direction. Around 10 minutes later or so he just went so we thought the problem was done.”

Dale McDougall, Love FM Belize: The drama was far from over and according to a second resident we spoke to he had heard that Zuniga went back to the Mendez’s to get his wallet and phone. This second eyewitness asked not to be identified as well for safety reasons.

Witness 2: “The boy he was quarreling for his phone and wallet. ‘Give me my phone give me my wallet I will go.” but the next boy who was fighting stoned  the boy with a bottle and burst his head and that’s why he went to call the police about it but the officer was at home. Then he came back. When he came back he chopped them because they were sleeping.”

Dale McDougall, Love FM Belize: And that eerie sound of a machete  going into flesh is something that remains etched into this man’s memory.

Witness 2: “I could hear them machete after when he committed the murder. I could hear – I never imagined it was that he was chopping somebody but it is a normal noise you hear when somebody would be chopping the grass or so it’s just that I heard one then he came out and I could see the blood from the matchette and then I realized he killed somebody.”

Dale McDougall, Love FM Belize: Police say however it was more than just a wallet on her phone, it was a case of Juan Arturo Mendez wanting Zuniga out of his home and gone for good. 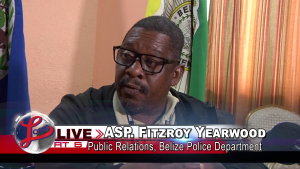 ASP Fitzroy Yearwood, Public Relations, Belize Police Department: “An argument occurred earlier that day between a friend of Juan Arturo that he gave lodging at the residence. It is reported that he asked that person to leave because he had overstayed his welcome. That person refused.”

Dale McDougall, Love FM Belize: Refusing to leave was one thing but Zuniga threatened to do more damage and those threats have village residents living in fear.

Witness 2: “The intentions he was saying was that he would come back and finish his work so it must be other people in there but I can’t assure that.”

Dale McDougall, Love FM Belize: But not long after Zuniga was caught right in the middle of crowds that gathered at a crime scene. Residents who are reeling from the violence now want Zuniga behind bars for very long time.

Witness 1: “If he did one thing right here and he comes out he could do a next thing.”

Witness  2: “And I hope that he stays in jail that they don’t let him go because if he comes out on bail or something he could just come and finish the job.”

Up to news time, Zuniga had not been officially charged or arraigned.