The Belize City Council tonight is condemning gun violence following a shooting incident that involved Deputy Mayor Micah Goodin. The Council says that it feels (quote) “obligated to publicly denounce any form of violence, particularly gun-related violence. The incident that unfolded over the past weekend involving the Deputy Mayor and a Youth Shadow Councilor infringes on our core values…” (end of quote) The council is encouraging the police department to continue their investigation thoroughly in this matter. Meanwhile, Goodin is sharing his version of events. He posted on Facebook saying that his role in the incident was one in which he was trying to prevent a murder from happening. Goodin says that when he was leaving the establishment, he noticed the two groups, one of which was hurling insults and threatening to murder a young man in the other group. He said quote “I felt the responsible thing to do was to act as a mediator and make peace between both groups” Unquote. He also said that while trying to act as a peacemaker, one of the men was responsive to his suggestion to make peace but the second was less receptive. He then reports that things escalated and quote “their rage, fueled by alcohol, was aimed at me. Despite it all, I simply tried to deescalate and pacify the situation. When I realized that my efforts at preserving peace had been futile, I drove away.” Unquote. Goodin’s statement ends by saying quote “If trying to prevent a young man’s death or trying to preserve peace will cost my life and political career, that is a price I am willing to pay today and every day” End quote.

As we reported, the shooting came as a result of a dispute between two groups of men. On one side, there is Goodin and 25-year-old Tarique James, who were hanging out with some friends at an establishment on Newtown Barracks early Saturday morning. On the other was a group, which included 29-year-old traffic warden, Kenyon Wilson. Police told us yesterday that Wilson approached the deputy mayor, who had an exposed pistol. Wilson says he was approaching Goodin, the deputy mayor got into his vehicle and left. That’s when someone in Goodin’s backseat fired three shots, prompting Wilson to return fire. Attorney for Wilson, Richard “Dickie” Bradley spoke to Love News. 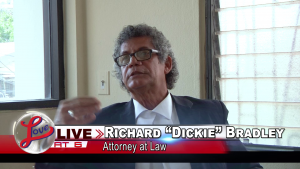 Richard “Dickie” Bradley, Attorney at Law: “Well, wherever you have two or three persons, it is highly unlikely they can all see the same event so you will have different viewpoints. No? That is not surprising. The big surprise is that the vehicle that took away one group out of the altercation group, they fired shots and the question is whether the shots were fired directly at the other group or just fired. They will, of course, have different versions. The man who put his hand out of the vehicle and started to shoot will say he wasn’t shooting at anyone. The ones who shot back will say he was shooting at us. So, the problem is that they did not hear, I think maybe it was you who did that interview, where I advised people, free of cost, don’t give any statements to the police. My client gave a written statement. He claimed that he was abused in the sense that he was not informed of his rights, which are written. You have a right to an attorney. You have a right to remain silent. He was not told those things. He was asked if you could give us a statement so we could kind of find out what happened. They then got a statement then told him you have a right to remain silent. You have a right to an attorney. But he already gave the statement. On the basis of the statement, they then charged him. So he’s charged with shooting at two separate persons, which is an aggravated assault that has to do with going to jail, you can’t get bail and he’s charged for causing a wound to another person and he’s charged for discharging his firearm in public.

Reporter: But he can claim self defence.

Reporter: He can claim self defence?

Richard “Dickie” Bradley, Attorney at Law: “He can claim a lot of things but he’s now in prison because he gave a statement putting himself at the scene and claiming that he did fire shots.”

Reporter: I think it was brought up, I think the Commissioner, that you have three persons armed with licensed firearms in one situation, a hostile situation and probably alcohol involved.

Reporter: It could have been very deadly that night.

Reporter: Was your client intoxicated?

Richard “Dickie” Bradley, Attorney at Law: “I visited him by the prison. I had no indication. If he was, the police would have charged him for having a firearm while under the influence of alcohol.”

Reporter: And is it that you would help him as well to write to the police as to why he should keep his licence? Cause I think that was one of the things the Commissioner had said that these three men would have to explain to him why he shouldn’t revoke their licence.

Richard “Dickie” Bradley, Attorney at Law: “Once the Commissioner makes up his mind, he will take away their gun anyhow. I would be wasting paper and ink to write anything.”

Yesterday, we asked Goodin’s colleague, Councilor Albert Vaughan to weigh in on the matter. For his part, Vaughan insisted that the council does not condone violence of any kind. 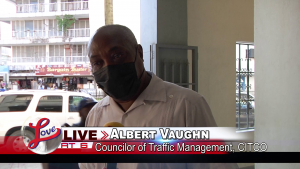 As we told you yesterday, police have confiscated three licensed weapons and ballistics will determine if one, some or all of the weapons were used in the incident. Police Commissioner Chester Williams will write to the gunowners to provide reasons why those gun licenses should not be revoked. Williams says that if the men used the guns while inebriated, the licenses will be rescinded.