Tonight, police officers from the Orange Walk Town formation find themselves on a hot burner as they face allegations of police brutality inflicted on a minor. Attorney-at-Law, Marcel Cardona has taken up the case of a sixteen-year-old student who claims to have been abused at the hands of police. Cardona recorded video clips of the minor, as he was about to be taken away by police to be incarcerated. The minor explained that he was physically and verbally assaulted by several officers. Cardona explained to Love News that this type of behaviour is unacceptable and unconstitutional. 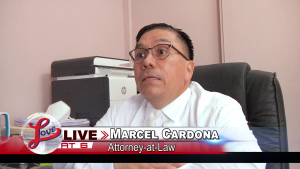 Marcel Cardona, Attorney: “In this instance by all accounts from the information provided by the client I am instructed that what had happened was that the minor child had ben detained, had been handcuffed and inside an office within the Orange Walk Police Department. He was forced to kneel down as if showing some sort of submissive to the power and authority of the police. To top it off it was not just a verbal attack upon this sixteen year old minor child but the situation deteriorated to where the child was subjected to a physical beating where the child I believe received several kicks to the abdominal area. Kicks which of course injured him. I must say that the young man’s first right, fundamental right for the police that are supposed to be the protectors, the guardians of our constitutional rights, the protectors of the rights of each and every single law abiding citizen in the country have now become the transgressors themselves.”

Cardona says that the minor was detained for almost fifty-three hours and the officers denied his request to speak with his client. He says this is a total abuse of power and is calling for an unbiased investigation to be carried out.

Marcel Cardona, Attorney: “What we’re seeing with the police is that they’re behaving every day more and more tyrannical, more and more as if they are a law unto themselves and they have no checks and balances over them and I call out again both the Commissioner of Police and the officer in charge of the police station to stop this, to stop violating the rights of Belizean citizens, to uphold the law. Section 2 of the Belize Constitution is very clear it states as follows “This constitution is the supreme law of Belize and if any other law is inconsistent with this constitution then that other law shall to the extent of the inconsistency be void.” So this is the supreme law of the country no Commissioner, no OC, can say that they are greater than the Belize constitution and we keep on seeing this over and over again and I even call out Kareem Musa the Minister to straighten out things in this ministry because things are out of control.”

The minor was detained for committing the offence of child luring and appeared before the Magistrate Court in Orange Walk Town today for arraignment.