The month of April is celebrated globally as Autism Awareness month and here at home NGO Autism Belize has once again launched its “Light It Up Blue” campaign. Blue is the universal color for autism and the organization is encouraging businesses, families, and individuals to wear blue everyday Friday of the Month. The purpose of the campaign is to help teach about autism, promote awareness, show acceptance, and provide support. Founder and Executive Chair of Autism Belize, Christy Almeida spoke about activities being held as a part of their Light it Blue Campaign and the importance of Autism Awareness Month. 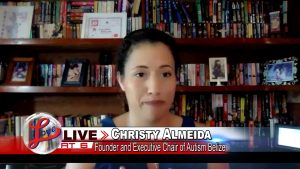 Christy Almeida, Founder and Executive Chair of Autism Belize: “Our campaign is really all encompassing. It’s encouraging people to light up blue and to wear blue on Fridays, folks on social media to start everything going but the main reason really is to teach blue as well, to teach about Autism. Last year we were very successful in getting the buildings lit up blue. People and companies participated a lot. We are really grateful for that. We did get a couple companies to invite us in to talk. This year, the request has been tremendous from companies who are not only just lighting up blue but asking us to come in and sensitise their staff, talk about whether it’s from inclusive workplaces to the basic “What is Autism?” “What are the early warning signs and everything?” I mean it’s tremendous. The library service has invited us to give parents perspective. Central Bank, who we went in last year to talk to them, this year they have a whole corner of information for all their staff and they’re going blue. So we’re just seeing it grow, Digicell, they’re going blue again this year and have invited us to come and speak to their employees. Airport. It’s just really been a tremendous response. I still have people contacting me. The Belize City Council went blue last night. I think they’re like the first ones that have went blue, really nice, but again scheduled a whole day of training for their staff and everything so even though this is just our second year, I am amazed by how much is happening. So we’re doing light up blue and dress blue on Fridays and teach blue throughout the month but the big deal is we’re going to be ending the month, April 30th, with a countrywide walk for Autism. So every single district, we have all the town councillors and city councillors in all the different districts working with us to help plan the walk. So we’re asking families to come out with their kids to show that we have nothing to be ashamed of. We are part of society and we’re asking everybody else to come and show that this is okay. We are accepting and we want to learn and we’re hoping that it’s going to happen countrywide on April 30th, So that’s a really big deal for us.”

Almeida added that this year, Autism Belize in partnership with Non- Governmental Organization (NGO) Therapy Abroad will be holding its first family day in the Cayo District./// 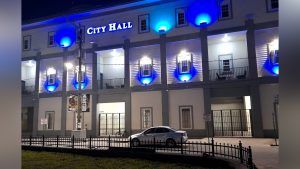