Last week Love News broke the story of bakers and millers who had made a formal request to have the price of the sixteen-ounce pack of sliced bread and flour adjusted upward. Today, Reporter Vejea Alvarez took to the streets to get feedback from bakers and consumers.

And, if you are one of the consumers that has paid more than a dollar and seventy-five cents for a pack of sliced bread you were overcharged. Late this evening our newsroom confirmed that the Cabinet is yet to authorize an increase. Minister of Education, Francis Fonseca says that Minister of Food Security, Abelardo Mai has been tasked to submit a paper on the matter next week. According to Fonseca, establishments that have increased their prices have done so illegally.Reporter: So are you able to say if Cabinet did approve the request for an uptick in the price of 16 oz sliced pack bread?

Francis Fonseca, Minister of Education: No, no, no. Cabinet did not make any such decision. In fact the Cabinet asked, I think, I believe it’s the Minister of Agriculture, Food Security, to bring a paper next week on the issue so that we can have a substantive discussion and look at the matter.”

Reporter: Sir, several bakeries, several grocery stores have already begun to sell their 16 oz sliced pack bread for $2.50. What’s your comment on that?

Francis Fonseca, Minister of Education: “They are in absolute contravention of the law. It’s illegal. It’s illegal. They have no authority to do that. A bread is a controlled priced substance so they have no authority to do that and until the law is changed, until there is some approval for the price to change, they are in violation of the law. We’re going to get a substantive paper from the minister responsible on Tuesday. We’re going to have a discussion, an informed discussion on the matter and then we’ll be able to state Cabinet’s position on it.”

The Supplies and Control Unit is looking into the matter. 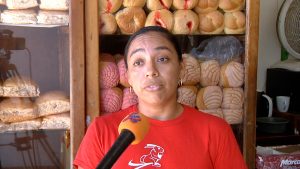