Last year, the Belize Coast Guard confiscated 200 feet of gill nets that were being used in Corona Reef. Prior to that, patrols in marine conservation areas led to the detention of two Guatemalan nationals along with an indiscriminate assortment of fish catch and gill nets in the Port Honduras Marine Reserve. Coast Guard Commandant, Rear Admiral Elton Bennett believes that the geographically complex reef systems that straddle both Belizean and Guatemalan sea spaces create both challenges and opportunities for enforcement and conservation. 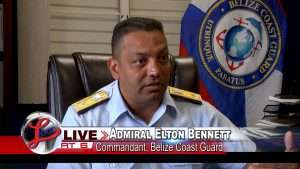 Admiral Elton Bennett, Commandant, Belize Coast Guard: “That’s the common practice for us to take corrective measures immediately, tell them to stop what they’re doing and if they continue then we confiscate the gill nets and if they are persist then we detained the individual. So it’s an escalation of activities. First is a verbal warning and if no action is taken as in return over to the Guatemalan side then we would take action. We have detained individuals as recently as last month, Guatemalans inside Belizean waters for illegal fishing so I think the Guatemalan community there have learned the position of the Belizean security forces in terms of no fishing activities inside our waters.”