Soldiers of the Belize Defence Force (BDF) will soon begin contributing to the Social Security Scheme. Approval for the move came down from Cabinet yesterday after years of lobbying by the BDF for inclusion. Love News spoke with the Minister of State in the Ministry of National Defence, Oscar Mira, who highlighted how such an inclusion will benefit the soldiers well after retirement from the force. 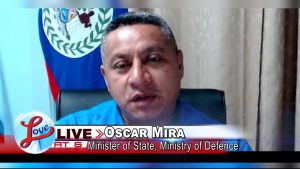 The exclusion of the soldiers was a decision made years ago under the premise that they may be more of a liability in times of war or military conflicts. With Belize not having any such conflicts in the foreseeable future, Minister Mira says the necessary amendments are now being made to the Social Security Act. Acting Chief of Staff at the Belize Defence Force, Major Rogelio Ramirez told Love News via Zoom that the amendments are very much welcomed and highly anticipated.

Currently, members of the Belize Defence Force are the only group of employees who are not allowed to make social security contributions. This has exempted them from several benefits, including maternity leave, sick leave and disability. A definitive date on when the inclusion will take effect was yet to be finalized.