Belize Electricity Limited (BEL) intends to become a hundred percent self-sufficient by the year 2035. The company’s goal is to increase the local production of renewable energy to become less reliant on the supply of power from Mexico. The electricity monopoly currently relies on our neighbour for around 45 percent of our energy supply. According to BEL, last Friday’s nationwide blackout, which was caused by a loss of BEL’s Mexican supply, highlights the company’s push for this goal. General Manager of Employee and Corporate Services, Dawn Sampson-Nunez, says the company is conducting a least-cost expansion to determine the necessary steps that can be taken to reach its objective as soon as possible.

Dawn Sampson Nunez, GM, Employee and Corporate Service: “While I have said that there is the possibility of what happening on Friday to be repeated, I can assure you, I can assure customers that BEL is prepared. We are ready for such possibility. As Karique has emphasised, when we lost CFE, on last Friday, we were able to bring back, we were able to restore back all areas in the county using local supply. Right Kareem? It was all local generation that we utilised to restore power so that is good. Now, that’s present day. We always have to be looking into the future so one of the other key things we want to communicate with you all today, you might have heard it before, we’re currently in the process of completing what we call a Least Cost Generation and Transmission Study. The importance of that study and why customers would care about this study is because it will help us identify what are the best options for generation going into the future. What are the best options to expand our transmission system going into the future? Renewable energy is something that, you know, those of us in the energy sector are actively pursuing, years ago, years ago in terms of capacity building, of local generation capacity building, the focus was on hydros and biomass. We’re now entering a second phase of local capacity building and so you’ll hear us talk more about solar, battery technology. You’ve heard us speak of that before, you know, moving from diesel to natural gas, wind technology. All of these things become very important. So we’re very excited about the Least Cost study and you’ll definitely be hearing more from us on that.”

Sean Fuller, BEL’s General Manager of Supply and Retails Services explains that the key components of the company’s study are system stability, self-sufficiency, and stabilization in the cost of power. However, he says BEL is not looking to cut ties with the Federal Electricity Commission (CFE) but is looking to power its network with the cheap Mexican energy the company provides. 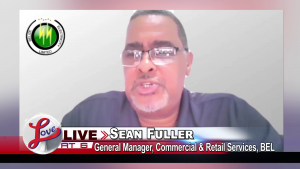 Sean Fuller, General Manager, Commercial and Retail Services, BEL: “We are finalising this least cost expansion so that, in fact I think the report is finally on its final leg. It should be available in the next week or two. But that Least Cost Expansion Study is looking at the future. What we need to do, starting today and in the future, to ensure that we have the right mix of energy supply in-country and the right transmission system to be able to deliver that supply to our customers. We’re focussing on renewable energy resources and self sufficiency. Simply meaning that we’re looking at utility scale solar to supply the uh, the expansion study is suggesting that we supply anywhere between 45 and 60 megawatts of solar on our network. To put that in perspective, our entire grid needs right now is 110 megawatts. The study is saying we can have as much as 45 to 60 megawatts additional of solar on the network. It also speaks of wind technology. We are able to be able to experiment based on the studies that has shown the potential for wind in certain areas of the country. It also calls for battery systems where we will install 10 or 20 megawatt battery systems for immediate response when we have issues on the network and also for solar intermittency. There’s a possibility for natural gas plants, a natural gas plant or two on the network and obviously, we’re also looking at what is known as Distributed Generation allowing customers with solar pv systems on their rooftops to be able to supply to the grid and so that entire mix will allow us to be more self sufficient and less reliant on Mexico, on the Mexican supply.”

According to the company, the current weather system off the Mexican peninsula may lead to issues with BEL’s power supply if CFE suffers damages to its network. Karique Marin, BEL’s Manager of Distribution, Planning, and Engineering adds in the case of that event the company’s local energy supply would be able to power the domestic demand. However, according to Marin, BEL is not able to accurately determine how long that local power would last.

Karique Marin, Manager, Distribution, Planning & Engineering: “That is dependent on a lot of factors to be honest. The amount of water we have in our reservoirs in the dam is key to that solution. But the amount of storage in terms of bagasse that we may have with our local suppliers is also important. The fuel, the fuel availability is important to really answer that question and also the demand from customers and how much they require. So, that is a balance. What is important to note is that we are able to meet the demand. We are able to meet the demand of customers. While it may be dependent on the current situation, if the Mexican grid is indeed damaged for an extended period of time, if we are able to get any electricity from them then that may help. If we’re not able to then we would be reliant on our local supply and back storage. If it’s raining then it makes it even easier for dams to be filled and then we can do it for much more extended time so that question really is a very technical but dependent on a lot of situations and a lot of probabilities happening.”

Sean Fuller, General Manager, Commercial and Retail Services, BEL: “The question highlights the need for us to act swiftly on the recommendations coming out of the Least Cost Generation And Transmission Plan. That is to get the solar systems installed, the utility scale solar. To get the wind technology facilities installed and to get the battery technology installed as quickly as possible that in the event there’s some catastrophic loss or extended loss of supply from CFE or from any of the other resources, we’re able to still remain self-sufficient.”