Tonight, a Belize City police officer is extremely happy after winning the Fantasy Five jackpot on Tuesday night. Bonifacio Rash bought the winning ticket at a store on Sixth Street and won the three hundred and seven thousand dollar jackpot. Today, Rash went in to collect his prize which was taxes was two hundred sixty thousand nine hundred fifty dollars. According to the father of two, he was been buying the same number for over a year and a half. 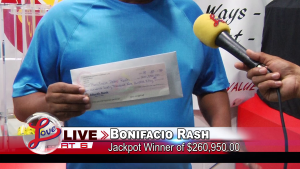 Bonifacio Rash, Jackpot Winner of $260,950.00: “I have contracted these numbers for a year and a half. I just bought some birthdays and the months and I just put the year of my siblings I put them together and from then I have been purchasing that like a year and a half and yesterday I bought it at 6th Street and last night I went and checked if the number actually played and when I was going through my ticket I noticed that my numbers played.”

Reporter: What was your reaction?

Reporter: What was the family’s reaction when they found out you one?

Bonifacio Rash, Jackpot Winner of $260,950.00: “Well everybody is happy. I have no immediate plans for it yet but sure for sure I’ll put it into good use. It is going to change my life because it’s like what you said it’s a very large sum of money I’m going to maybe build house and likewise invest some in education.”

Karil Wallace, Public Relations for Fantasy Five, explained that Rash’s winnings included half of the unclaimed jackpot that was won back in January. 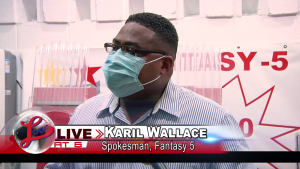 Karil Wallace, Spokesman, Fantasy 5: “We had the winner Mr. Rash he had won $307,000 in last night’s winnings so after tax he will be taking home $260,950. Now that’s a whole lot of money for $2 to turn over into. I say this all the time that I mean – and we also want to congratulate him on behalf of the folks here at Fantasy 5 and our sister companies and we want to encourage people to continue purchase Fantasy 5 because you are seeing where your $2 will pay off at some point in time. Now we had a winner last month and or our jackpot had restarted at $150,000, now we had a jackpot that was won back in January which was unclaimed so half of that was paid to government and the other 50% was deposited to that 150 and change so that is why this jackpot was already at $307,000. Now the jackpot restarts tomorrow at $150,000 dollars, $2 for a ticket, tickets are sold until a quarter to eight it draws at eight o’clock get your tickets because it could be you.”