PUP’s Deputy Mayor for Belize City, Micah Goodin, is tonight in another controversy. Goodin was involved in a shooting incident over the weekend in the Old Capital. Police say that the incident stemmed from a dispute between two groups of men. Goodin and 25-year-old Tarique James were with some friends socializing at an establishment on Newtown Barracks in the early hours of Saturday morning. The men claim that while at the establishment they engaged in an altercation with another group of men including twenty-nine-year-old traffic warden, Kenyon Wilson. Police say that during the altercation Wilson approached Goodin who was reportedly carrying an exposed pistol. Wilson claims that when he was approaching Goodin, Goodin got into his vehicle and sped off. According to Wilson, in the process of driving off, someone in the backseat of the SUV fired three shots in their direction prompting him to return fire. Tonight two men, not including Goodin, have been charged with firearm offences. Reporter Vejea Alvarez has the story.

Vejea Alvares, Love FM News: Just after midnight Saturday, gunshots rang out nea a popular nightclub on NewTown Barracks. The shots were allegedly fired by 25 year old Taiq James who was in the company of Deputy Mayor of Belize City, 28 year old Micah Goodin. James reportedly opened fire on 21 year old Kenyon Tillett who then returned fire as James Goodin fled the scene in Goodin’s black Nissan Rogue. According to Commissioner of Police, Chester Williams, the entire ordeal was out of a feud between two groups which Goddin allegedly tried to quell. 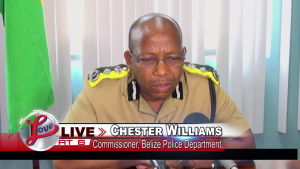 Chester Williams, Commissioner, Belize Police Department: “During the event, Micah Goodin may have intervened to quell the dispute between the parties and he got into his vehicle along with two other persons and drove off. While driving off, one of the occupants of Micha Goodin’s vehicle fired several shots and one of the persons with whom they had the misunderstanding returned fire towards Micah Goodin’s vehicle causing four bullet holes and one person who was inside the vehicle got a bullet graze to the neck.”

Vejea Alvares, Love FM News: Goodin then transported 20 year old Tae Medina, Shadow Councillor of the Belize City Council, to the hospital before racing off to the Queen Street Police Station where he, James and Tillett were all detained. However, of the three men who all were in possession of licenced firearms, only Goodin was free to go after 36 hours in detention.

Chester Williams, Commissioner, Belize Police Department: “At the end of the investigation, Tillett was charged for aggravated assault, wounding and discharging firearm in public. Tyreek James was charged for discharging firearm in public. The investigation did not reveal that Micha Goodin was involved in the shooting incident so he was released after 36 hours in custody.”

Vejea Alvares, Love FM News: James and Tillett were taken to court this morning where they faced a number of charges that included discharging of firearm in public.

Chester Williams, Commissioner, Belize Police Department: “One might question, why charge for discharging firearm in public? The reason why we did that is because, obviously, the two parties are in dialogue and are hoping to settle the matter between themselves. So they might go to the court this morning and say they don’t want anything against each other and the court may withdraw the complaint but when it comes to the discharging of firearms in public, that’s a matter for the police.  They cannot withdraw that complaint so that will be a matter that will be left for the courts and then the police are the complainant in that particular incident and then we will be able to prosecute them notwithstanding them having withdrawn the individual complaint against each other.”

Vejea Alvares, Love FM News: Since Tillett had reportedly returned fire after being shot at, ComPol Williams says he may be able to claim self defence, that’s if he had made a complaint against James or Goodin.

Chester Williams, Commissioner, Belize Police Department: “Certainly, he could claim self-defence but let me say that Mr. Tillett was not forthcoming with investigators and so there is no complaint from him to say that the person from Goodin’s vehicle, James, had shot at him or pointed a gun at him per se. There is nothing because he was not forthcoming.”

Vejea Alvares, Love FM News: While Goodin wasn’t charged, Tillet alleged that when he approached him to talk, the Councillor brandished his licenced firearm. Nonetheless, ComPol Williams says he did not break the law.

Chester Williams, Commissioner, Belize Police Department: “He did not say that Micah took out the firearm and used it at any time. He even went to the extent to say that he didn’t know who fired the shot that was fired but he knew it came from Micah’s vehicle. Tyreek James, on the other hand, admitted to firing his weapon and so based on that, even though Micah had his gun on his side, the fact that he did not take it out to use it would not constitute an offence.”

Vejea Alvares, Love FM News: While the good councillor did not break the law, in the court of public opinion, many believe that given his social status he may have been acting with a sense of impunity and behaving in such a manner may have made him guilty by association.

Chester Williams, Commissioner, Belize Police Department: “It has nothing to do with public life. You’re a licensed firearm holder, you’re a licensed firearm holder. It doesn’t matter what social status is. It is expected that you’re going to carry out yourself in such a way that you do not make it obvious that you have a gun on you and that you do not go and consume alcohol with a weapon on you and that you do not use a weapon unless there is a justified reason to use it. So that is across the board, it doesn’t matter who you are.”

Vejea Alvares, Love FM News: Police have since confiscated all three licensed weapons and are expected to conduct ballistics tests to ascertain whether all three were used in the incident. In addition, the men will be written by the Commissioner of Police to provide the reasons why their firearms licence should not be revoked. However, if they have been found to be drinking while in possession of the guns, ComPol Williams says their licence will immediately be considered null and void. Reporting for Love News, I am Vejea Alavres.

We contacted Goodin and Mayor Bernard Wagner for comment- no responses so far.