Approximately thirteen people in Belize City were displaced on Saturday night after their apartment complex was battered by fire. The incident occurred at around eight-thirty at the corner of Faber’s Road and Caesar Ridge Road. According to fire personnel, the blaze broke at an apartment located at the center of the building that housed 61-year-old, Horace Lord; his wife, 57-year-old, Zeta Thomas as well as 14-year-old, Kenroy Lord, 36-year-old, Lavern Thomas, and a 4-month-old infant. The fire department was called out and was able to extinguish the flames, preventing fire damage to the other four apartments on the upper flat of the building. Supervisor at the National Fire Service, Kenneth Mortis says that the fire was sparked by a special needs child who playing with matches. 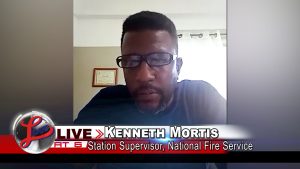 Kenneth Mortis, Station Supervisor, National Fire Service: “Investigation reveals that a 14 year old minor was left in the building while other family members were outside and this 14 year old got mischievous and played with some fort of lighter or match whereby he caught the interior contents of the building on fire. The family members outside, they had to then physically break down the door as he had then locked himself in the building, that’s the unfortunate situation. Fortunately for this scenario here, he escaped the burning building without any physical damage and I do believe he was taken to the nearby ambulance just to make sure that everything was okay from his medical standpoint.”

Reporter: So from 11 to 12 people are left homeless from one mischievous act?

Kenneth Mortis, Station Supervisor, National Fire Service: “Unfortunately, yeah. Again it boils down to parents not giving accountability for their children, you know, that is something that we try to preach from the Fire Department standpoint. Regardless of the age, regardless of the nature of the child, keep your children in your eyesight and encourage them to hand over these flammable substances, whether it be a match, a lighter, a candle, it may be a Fish. It’s just giving account of where everybody is at and make sure that a minor is in the presence of an adult at all times. Unfortunately, this entire complex that housed approximately six different units wasn’t insured so any repairs that need to be done, the other two families will have to incur these expenses out of pocket. So if the need arises whereby some sort of civil suit or legal action needs to be taken then that will be between the families that were affected and the police department.”

According to Mortis, several residents from the area assisted in the extinguishing of the blaze that he says could have caused far more damage.

Kenneth Mortis, Station Supervisor, National Fire Service: “I must give credit to those heroic non-fire fighters that placed themselves in the frontline of assisting the department in containing this blaze so I must make it known that this was a coordinated effort between the fellows from the neighbourhood and the Fire department. Our initial response was quick, unfortunately, not quick enough. Even though it is still in the eyes of the general public that as there’s a fire, the Fire Department should be there. We had to do strategic fire fighting. In the view of the Fire Department, we were focussing on the rear of the building so that it didn’t jump to a nearby stretch that was approximately 3 feet away. It could have been worse. It could have probably have lives unaccounted for. We could have lost an entire block. I am grateful to those non-fire fighters who turned themselves into a fireman on that particular morning. My fire fighting team only comprised six on duty personnel that morning, initially, and then we were accompanied by another four off duty personnel so we had enough firemen on the scene so again, I just want to keep thanking those fellows that committed to assisting us in taking care of that blaze.”

The value of the loss suffered by the victims is unknown.