And fishers from Caye Caulker and the north are not the only ones upset with the government’s new fisheries regulations. Here in Belize City, fishers are fuming. Our newsroom spoke to two fishers who say that they had little knowledge about the change. According to Dale Fairweather discussions were held with the National Fishermen Cooperative some years ago but not in recent months and not with individual fishers. 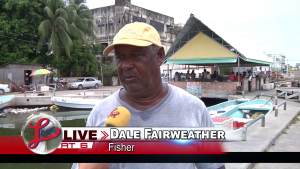 Dale Fairweather, Fisher: “The only problem I have with that is that is close to 25% of your annual catch so like fishermen will make less money plus that is more illegal lobster on the black market because all of those undersized will become undersized and if you don’t have any enforcement at the Caye they will end up on the black market.”

Reporter: Do you know if any other fishermen or cooperatives were consulted before these laws were set out ?

Dale Fairweather, Fisher:  “Well I know some years ago our National Cooperative, which I’m a member of, made it known to the fishermen that they had plans to increase the size but when they did it there was no consultation to fishermen per se. I know that they stated on the SI that they consulted both cooperatives but nobody consulted any individual fisherman.”

Fisher: “I was told that it’s supposed to be 4.5 which is four and a half ounces but I heard a meeting already happened and I have no knowledge of it and things like these should be informed on so much days for example because there are so many fishermen that I know of. We have a total of three thousand plus fishermen and I can tell you personally that there’s only a few of us that know these things. Things like these need to be exposed on a more basis like more days and closer on to the season before it opens because there’s a lot of people that have no knowledge of what’s going on and it’s a shame.”