Police in Belize City are investigating two murders. Both happened on Saturday night, an hour from each other. The first victim was 39-year-old Mark Lord. Lord, a construction worker, was gunned down at around 6:35 pm while he was walking on Jones Street. Investigators say that Lord was heading towards McKay Boulevard when an unidentified man snuck up on Lord and blasted several shots in his direction. Lord died on the spot. Sharing details was Police Press Office, ASP Fitzroy Yearwood.
ASP. Fitzroy Yearwood, Public Relations, Belize Police Department: “Quick police response led to the apprehension of two men and the discovery of what we believe was the weapon used in the orchestration of that crime. Both men are still detained and hopefully by the end of today, we will levy charges against him. We believe that one of the men that are detained and Mark Lord was involved in an argument earlier that day. We know that Mark was walking when he was approached by one of these men who opened fire, causing his fatal injuries. That man then proceeded to a yard not too far away from where this crime was committed. When he saw the police coming, he threw the weapon in the yard on a structure that resembles a foul coup and officers were able to recover that firearm. So we have both men detained pending charges.  Until we are extremely clear which one of them orchestrated the crime or if both of them conspired to commit that crime. We have seen where simple little arguments have reached a fatal state and we try to be, as much as possible, everywhere that we can but murder is really difficult for us to stop. We do not know when that person would snap and something in their head just tells them to go and do certain things. So what we try to encourage people to do, if you and somebody has an argument and that person walks off, you try to get out of there too. I mean, maybe when that person’s rage settles, that person would change their mind but it’s unexplainable. Murders cannot be explained as easily as we wish we could have explained it to the public.” 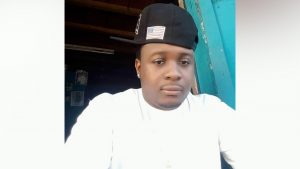