A Belize City resident is extremely happy tonight after winning the Fantasy Five jackpot on Tuesday night. 38-year-old Nigel Franklin bought the winning ticket at a store on Mahogany Street and won two hundred and twenty-five thousand dollars. Franklin went in today to collect his prize which after taxes was one hundred ninety-one thousand two hundred and fifty dollars. He told Love News about how he was able to come up with the number and how he will be using the winnings. 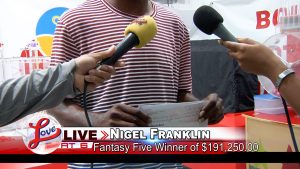 Nigel Franklin, Fantasy-5 Winner of $191,250: “Happy, I didn’t even sleep last night. I was at home eating and my niece got a call that somebody from behind the Martin’s area won the Fantasy-5. Then my mom hollered for me and told me to check my number and when I checked it, I told them that I won it but nobody believed me. Right, so I ran downstairs to them and told them check it yourselves and when they checked it, everybody just screamed out.”

Reporter: How did you get those numbers? 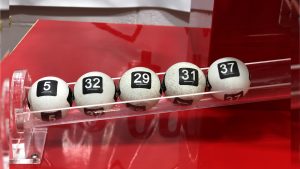 Nigel Franklin, Fantasy-5 Winner of $191,250: “Well it was an old ticket that my mom sent me to go collect three numbers off of and when I went to the shop, the “chiney” felt like I went to buy the same set of numbers. So he printed out a new ticket, right? And then I told him no, I came to collect three numbers. Then he paid me my 25 and I was walking out of the store and then I stopped and I realised that I was going to buy the same ticket back and that’s how it happened.”

Reporter: What are you planning to do with this winning?

Nigel Franklin, Fantasy-5 Winner of $191,250:  “Well I plan to fix my house and help out my family, my ma, deal with my bills and just save the rest and enjoy myself.”

Reporter 2: Do you have a wife or kids?

Nigel Franklin, Fantasy-5 Winner of $191,250: “Well I plan to get married this September so it came in handy.”

While Franklin wasted no time in collecting his winnings, another Belize City resident who won back in January and is yet to claim their $249,000 jackpot. Karil Wallace, Public Relations for Fantasy Five, says that the lucky winner has up until next week before the ticket expires. 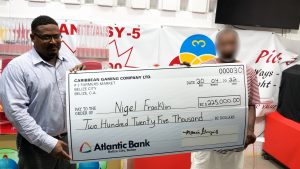 Karil Wallace, Spokesman, Fantasy-5: “What happened is, we had a jackpot that was won back in January the 27th for $249,000. No one has come in to claim that jackpot. For some time now we have been making mention on our draws for the night for that person or whosoever may have bought the ticket which is at the corner of Cemetery and Euphrates Ave., that is one of our agents, for them to come in and claim their prize. So for now they have approximately a week to come in and claim that prize because as of next week that ticket will then be expired. Upon expiration of that ticket, what we do here at Fantasy-5 is that 50% is paid to taxes and then the other 50%, we deposit it to the current jackpot at that time. So whatever the current jackpot is at that time, half of that amount will be paid, will be deposited to that pot and then the jackpot will continue. So we want to encourage whosoever may have that ticket, and you probably want to come in and claim that ticket. You have time. Next week it expires and then we will do what we need to do but that’s how we do it here at Fantasy-5.”

The jackpot now resets to one hundred and fifty thousand dollars.