A family in Belize City is currently questioning the death of their loved one who passed away last week. On July 13, fifty-four-year-old Harrison Powell was found motionless inside his Unity Street home. Police had initially believed that he died of natural causes; however, today Powell’s postmortem revealed something more sinister. Reporter Vejea Alvarez tells us more.

Vejea Alvarez, Love FM News: Tonight police are investigating the death of a sanitation worker who was found inside his Belize City home last week. On Wednesday morning 54-year-old Harrison Powell was found by his family inside their Unity Street home. The family told officers that the night before Powell had been complaining of pain in his chest but refused to go to the hospital. Initially, investigators labeled the incident as sudden death however today a post-mortem examination revealed that Powell died due to an infected stab wound to his abdomen. His sister Elswith Powell told our newsroom that this morning the family was at morgue when they received the information. 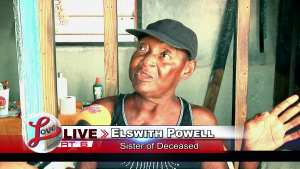 Elswith Powell, Sister of Deceased: “I was hustling I was selling my clothes. My sister told me by the morgue to do the post-mortem and they said he got a stab. Well, how comes he got the stab ?”

Vejea Alvarez, Love FM News: A little over two months ago on May 16 Powell left the Belize Central Prison after completing a five-year sentence for burglary. Notably when Powell went to court for the incident he asked the presiding magistrate for leniency claiming that the reason he committed the crime was because he was possessed by the devil and had been a victim of witchcraft since he was a child. And according to his sister Powell had several run-ins with the law but he was an okay man that was known for having sticky fingers.

Elswith Powell, Sister of Deceased: “Everybody knows that he liked to steal not as a murder man. The world knew that.”

Vejea Alvarez, Love FM News: What type of person was he ?

Elswith Powell, Sister of Deceased: “He was a nice person to his family and thing, I can’t complain.”

Vejea Alvarez, Love FM News: Powell’s sister says she’s still in shock and cannot believe that her brother was killed and if so by who ?

Elswith Powell, Sister of Deceased: “I am lost. I am confused. From my brother died up to now I haven’t slept. All I do is sit here by this bible and read for God to tell me what really went on. I miss my brother and the father will let us know what happened.”

Vejea Alvarez, Love FM News: Police have now launched an investigation to determine who and why someone would stab Powell.