From bridges to ball: Belize’s female U-21 contingent went head-to-head against the national team of El Salvador last night as the 19th Central American Female Volleyball Championship winds down this week. Dale McDougall caught the action last night and here are some highlights.

Dale McDougall, Love FM News: Team Belize continued its winning ways on Thursday night at the Civic Center. The National Youth ‘21 Female Volleyball Posse went up against the contingent from El Salvador. Team Belize took an early lead in the first set. The Salvadorian ladies applied the pressure very early. Belize was slightly sleeping with a number of unforced errors, however Team Belize got into their rhythm and clinched a narrow victory in the first set, 25:23. Garreth Bruce explained the team will get its act together as the championship progresses. 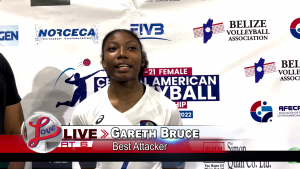 Gareth Bruce, Best Attacker: “I guess we just need to focus more and concentrate more on our service because we worked on it in practice the past couple days and it’s gotten better than yester, uh, that was yesterday?

Male: No, it was the before. Tuesday.

Dale McDougall, Love FM News: At the start of the second set the Salvadorians were applying the pressure and kept Team Belize at bay but that was short lived because the Belizean superstars pushed through the noise and stretched their lead considerably. Iman Safa, the best setter thus far, said that despite the sluggish beginning, they were able to rebound. 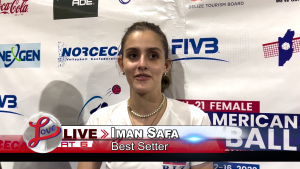 Iman Safa, Best Setter: “We started off a bit slow. I think I was just able to like. I was kind of intimidated because  saw that El Salvador took Guatemala and Costa Rica, no. Honduras. Honduras to five sets so I didn’t want to like, you know, slip up. But, it did happen in the first set. It’s okay. You know, we got over it and I just want to make my concentration on the court and not get taken away by the crowd.

Dale McDougall, Love FM News: At one point the team was leading by 10. Gareth Bruce, team captain Sofia Solano, and the consistent setter Iman Safa, maintained control. It was the great wall of Belize that demoralised the Salvadorians by the end of the second set. Belize easily clenched victory 25:12. Solano spoke about how the team managed to keep it together. 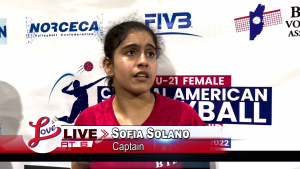 Sofia Solano, Captain: I think that our team is just full of leaders. Everybody is a leader on our team. You know. We always work well together. You know. We encourage. We motivate each other so we have that chemistry as well. And for me, I like to spread positivity. I prefer to say, to tell the girls like we got this guys. Let’s push. Let’s push. We have to close this off in three sets and then when we try to do that, the team gets hype. You know that’s what allows us to finish a game strong, to have that mindset that’s necessary to close off a game like that.”

Dale McDougall, Love FM News: The Belizean audience was pumped heading into the third and final set while the already fatigued Salvadorians cheered and vollied, they were no match for Team Belize and fell 25:16 to our nation’s girls. Despite the errors early on, Belize kept its squad in place for the most part. El Salvador made as many as five substitutions in as many serves. Then Team Belize faces Honduras tonight and Guatemala on Saturday. For now, Team Belize remains atop the standings undefeated. Dale McDougall, Love News.

Tonight’s game gets underway just minutes from now at the Civic Centre.