Belize has begun talks with the Millennium Challenge Corporation (MCC), based in the United States, to explore possible projects aimed at boosting the country’s economy and reducing poverty. The discussions are the result of Belize’s high score on the MCC Scorecard back in December 2021, where the government showed tremendous efforts in reducing poverty and boosting the economy, among other areas. Representatives of the MCC were in Belize this week and had met with Prime Minister, Dr. John Briceno on Wednesday. During those meetings, the CEO of the MCC, Alice Albright signed an initial engagement agreement that will give the government one point five million Belize dollars to get the ball rolling. The funds have been earmarked to establish a team of experts that will conduct a rigorous assessment called, “A Constraints to Economic Growth Analysis”. The analysis is being done to give the government a clear idea of the most significant factors constraining economic growth. It will also lend help in identifying the areas where Belize can improve its economic development with funds that will be provided by the MCC’s Compact agreement. According to CEO Albright, the partnership will provide Belize with the opportunity to access a five-year grant through the aid agency. 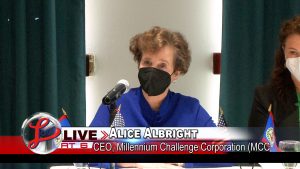 Alice Albright, CEO, Millennium Challenge Corporation (MCC): “The compact development process is very rigorous and it involves rigorous economic analysis of the most significant factors that constrain growth in a country and these factors will then inform what we call the Project Identification Phase. All of this is now to unfold. MCC also conducts extensive consultations, engaging potential beneficiaries, civil society, the private sector, other donors and relevant government entities within the Belize Government to get their points of view and their very very important inputs. MCC’s programmes are built on what we call country ownership. The people of Belize understand the challenges here better than we will ever do so we want very much to work closely with the Belize Government and also in close consultation with the private sector and civil society to lead through the compact development process and the Implementation Processes that will follow. In terms of timing, a typical compact development takes two to three years with analysis and planning before a formal grant agreement can be signed but we’re making every effort to try and go through that process quickly. However, commitment to this process and going through it carefully helps minimise implementation risks. Throughout, we ensure input from all the stakeholders and doing so really sets up the program for success in the future and makes sure that we are benefitting Belize and all the people of Belize comprehensively. So we think about constraints to grow the next phases we call root causes. That gives rise to defining what the projects are. We take a very long term view about economic growth and poverty reduction so we have to really ask a lot of important questions. Often, the one we ask the most is why and then we have to back things up by a lot of data. So we will go through the process as quickly as we can but also as rigorously as we can. So at this stage I think it will be difficult to estimate a precise timeline but we will get on it as fast as we can. We know, particularly through some very productive conversations we’ve had with Dr. Osmond, we know about the urgency of the situation here. We will take this very seriously and my team will be on it and make sure that we get through the process as fast as we can.”

Chief Executive Officer in the Ministry of Economic Development, Dr. Osmond Martinez will be spearheading the team of experts. Love News understands that the team will also be entrusted to develop a proposal to be sent to the MCC; that proposal will include proposed projects that will seek to address the identified constraints in a way that will have a sustainable and inclusive impact on economic growth. According to Dr. Martinez, the government has already identified initial constraints that will be the main focus of the MCC’s compact agreement.

Apart from giving the access to the funds to achieve its sustainable development goals and reduce poverty, U.S. Embassy Chargé d’Affaires, Leyla Moses-Ones says the agreement helps to strengthen relations between both nations. 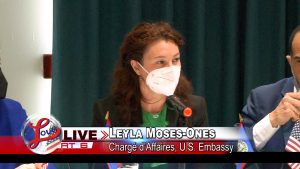 Leyla Moses-Ones, Chargé d’Affaires , U.S. Embassy: “When I say we opened a new frontier it’s because we’re going to be doing very deliberate partnership work on the frontier of prosperity building. I think that here, the United States Embassy has been very active in the citizen security sector. We’ve worked on helping the backlog reduction in the justice sector. We had a number of different projects on information literacy, investigative journalism, and so traditionally we focused on those areas of assistance and this is the new frontier in terms of a consecutive effort to work through the Millenium Challenge Corporation to identify areas where prosperity can be driven, where the Belizean economy can be lifted up to include a concessive growth and I’d like to say that I was so impressed by the MCC team, their breadth of knowledge. I’ve learned a lot over the last three days in listening to candid thoughts of all stakeholders and I want to assure everybody that gender inclusion, social inclusion of marginalised groups, all of these considerations are actively being factored into any plans moving forward.”

Notably, this is the first since 2013 since that Belize was selected as a candidate for a grant program through the Millennium Challenge Corporation (MCC).