Today, Belize hosted it’s first-ever Climate Change Catalogue Showcase to display the work it has been doing to tackle the effects of climate change. The event was held by the National Climate Change Office, which falls under the Ministry of Sustainable Development, Climate Change, and Disaster Risk Management. The two-day affair featured presentations on key climate change initiatives such as Belize’s Updated National Climate Change Policy, Strategy and Master Plan, Low Emissions Development Strategy and Action Plan. Minister of Climate Change, Orlando Habet, spoke about the importance of updating stakeholders on the work it has been doing to protect the country from the shift in weather patterns.

Orlando Habet, Minister of Climate Change: “This morning we had the inception of the climate change event. First of its kind for the National Climate Change Office showcasing some of the work that the office has been doing. Of course, also, highlighting the collaboration with the different stakeholders, the different actors that have participated in the work of the Climate Change Office. Also recognising the assistance and collaboration that we have had with different agencies. The United Kingdom through the Engender project, the Canadian, and UK Government also with the ICAD program. Also, to showcase the actual documents that have been done through the collaboration of the different stakeholders and agencies with the Climate Change Office which includes our National Determinate Contributions which were submitted last year to the UNF Triple C just before CAP 26. Looking at the, also the LEDS which is the Low Emission Development Strategy for the country and where we should go in the long term in terms of our NDCs and the reduction of emissions. Hoping that some time before 2050 that we can be down 95% or more of the total emissions. So, as a first of its kind, but I think it was imperative that something like this happens, especially where you can give recognition to those people and those agencies that have been collaborating with us.” 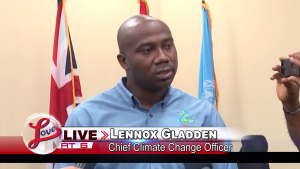 Lennox Gladden, Chief Climate Change Officer: “While we just launched the documents today per se, a lot of the activities on the ground have started via either the National Communications  the Climate Promise or also the, and also the Engender. We looked at doing some coastal protection scenarios which eventually we’re going to scale up to a full blown proposal for submission for support. So these are some of the interventions that are currently happening and for the coastal protection initiative, we’ll be focusing on Dangriga because we’ve, we’re going to start with Dangriga and work our way, our way down. For this afternoon, we’ll be visiting some of the recipients, some of the beneficiaries. First of course, looking at the bowser* that the project funded and we’re going over to BLPA, their model farm, see if it can be a way to promote resiliency within the livestock sector. Tomorrow we go down to Dangriga and that visit is to meet with some of the stakeholders, some of the, because there were certain feedback that came from some of the communities especially as it relates to some of the  social barriers. So, we go down there tomorrow to have that discussion and also present on some of the findings that came out from the initiative with the Cubans because we did a level of *unclear* cooperation with our Cuban Counterparts which of course was supported by the 5Cs as well.”