Belize is open for business. That’s the message that the Briceno Administration sent during last year’s National Investment Summit. The event, which was the brainchild of the Office of the Prime Minister, was hailed by the government as an important signal to investors. But did GOB get the outcome it was looking for? That’s what we asked the CEO of Economic Development, Dr. Osmond Martinez. He says that since the event, Belize has been bombarded with investment opportunities from international financial institutions and private investors alike. 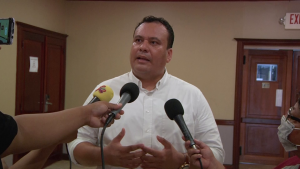 Dr.Osmond Martinez, CEO, Ministry of Economic Development: “In the past investors had a lot of challenges which we still have a lot of challenges and we need to to make improvements in terms of investors coming to Belize but investors feel that there is more accessibility to the present government. Our Prime Minister has been traveling, giving speeches in some of the highest platforms in the world such as the European Development Day, a first time a Belizean being there, Lisbon at the Ocean Conference is the first time a Prime Minister gave a speech there. COP26 it was the first time a Prime Minister gave a speech there. He was also in Kigali I mean this by itself is promoting Belize. He has been to the Caribbean three times in the last four months and that by itself is promoting Belize. The Blue Bond has also set Belize, the Blue Bond Transaction, has set Belize – the international investors are looking at us as a place to invest and why ? Investors always want to invest where there is macroeconomic stability. So what does that mean ? That now for the last two years Belize there has been stability in the macroeconomy. So when you look at the end of 2020, 2021 and now 2022 there is constant growth but when there is growth and there is growth and decrease I mean investors will not come. Investors always look at macroeconomic stability that is one. And two there is also we need to take advantage of the peg that we have with the US dollars. That’s a two to one while the rest of the world right now is suffering where there is a lot of fluctuation within their currency ours has been stable we don’t have that problem and so we have to promote it. And for the first time last year in November, the Office of the Prime Minister launched the Invest Belize and for the first time I recall very good on his presentation he says “Belize is open for business” and that has been the new way of promoting Belize: Belize is open for business.”