At 12:43 pm today the Government’s Press Office, which is being widely advertised as the only credible source of information, announced that a quarantine order was being enacted for the entire country of Belize.  According to the Cleveland Clinic website and other international medical sources, a quarantine would be put into effect when people or groups who don’t have symptoms were somehow exposed to the sickenss

At 12:43 pm today the Government’s Press Office, which is being widely advertised as the only credible source of information, announced that a quarantine order was being enacted for the entire country of Belize.  According to the Cleveland Clinic website and other international medical sources, a quarantine would be put into effect when people or groups who don’t have symptoms were somehow exposed to the sickenss.  It raised concerns as a quarantine would ordinarily be done when there is a major outbreak.  By 3:37 pm, the Government’s Press Office issued an amendment and the Attorney General clarified that the country, in fact, was not under quarantine.

Hon. Michael Peyrefitte, Minister of National Security: “The country is not under quarantine, just certain rules have been made so that we can practice some social distancing to prevent the spread of COVID-19 if it exists and we don’t know where it does in certain places if it does exist. We know it exists in San Pedro two persons have tested positive so San Pedro has its own declaration of state of emergency for that area. These guidelines that we’re going to give are what everyone in the country is supposed to follow by law but it doesn’t mean that we are under the same conditions and restrictions that the people in San Pedro are. We’re not under quarantine but no more than ten people should be in the same room together as a safety precaution. Let me repeat the country is not on lock down. The country has not been quarantined, that’s not the case. All that has happened is that the quarantine authority has issued certain rules for us to follow to ensure that there are best practices in place to prevent the spread or the occurrence of COVID-19 in your area especially your home.”

And while the country is not under quarantine, San Pedro Town remains in the State of Emergency.  The island went from being under a state of emergency for 72 hours to 30 days.  Peyrefitte clarified what this State of Emergency means for the residents and business owners on the island.

Hon. Michael Peyrefitte, Minister of National Security: “Currently in San Pedro no person shall enter nor exit Ambergris Caye for the next twenty seven days. Nobody can go to Ambergris Caye, nobody can leave Ambergris Caye. If you’re not from Ambergris Caye and you’re “stuck” there we ask you to kindly be patient with us while we do a full mapping. Even though it is for the next twenty seven days it may not last the full twenty seven days. In five days, in ten days we could come and say “Listen, we have the issue contained and we no longer need the thirty days and we’re revoking the declaration of public emergency.” but we just want to give ourselves some time. San Pedro it’s not like we have closed it off with plastic, essential services will still operate, the island and the islands will not be allowed to run out of food, not be allowed to have water, not be allowed to have electricity that’s not what this is about. If you are a person who has been trapped on San Pedro as a result of the emergency and you need urgent medical attention for example or you need urgent medical supplies like pills or medicine or whatever you inform the authorities out there they will get that information or you call your family and you can call in to them and they will have that transported to you properly. The whole idea is for us to control the traffic going into Ambergris Caye but food will be out there, water will be out there, full electricity will be out there, all the services that are essential will be provided to Ambergris Caye. As it is we have some people who, some technicians from wasa who have to go out there to ensure that the water supply is consistent but those technical professionals will also have to be under strict guidelines when they enter the island and when they leave the island because then it’s absolutely important for the island to be functioning while it’s declared and area of public emergency. No person in San Pedro, some of these things under the quarantine rules, no more than ten persons in any public space, on private property. Persons gathering shall maintain no less than three feet apart and if you have COVID or believe that you feel funny with COVID on the island please inform the ministry that’s all that it is. As you know one person on the island tested positive and then subsequent to that the mother of that person tested positive so we felt we had to contain the island and we have to contain it until we can isolate just those people who have it so we can treat them properly and then we can free up the other people once we’ve done a general mapping.” 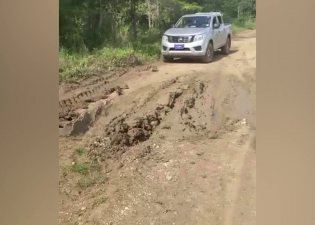