Belize celebrated Olympic Day annually on June 23 in commemoration of the founding of the International Olympic Committee. It is also celebrated to advocate for the Olympic movement which promotes Belizeans to move, Learn and Discover. An Olympic Day event will be held this Sunday at the Civic Center compound where National Federations will have demonstrations of their sport and allow the public to participate in tryouts. Representative of the Volleyball Federation of Belize, Bryton Codd, says that it is important to spread awareness about sports, especially to Belizean youth, so they can find an avenue to steer them away from crime and violence. Derrick Chavarria from the Cycling Federation of Belize says events like these create a positive impact on society. 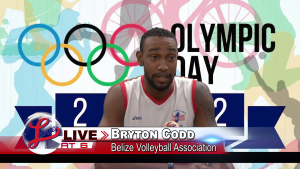 Bryton Codd, Belize Volleyball Association: “It ties back into the pillars of the Olympic movement which basically speaks about solidarity. It speaks about inclusivity and it speaks about equity, equality and basically how we move forward as a community to be active together to understand the importance of inclusivity for everyone pushing forward together to achieve development.”

Derrick Chavarria, Cycling Federation of Belize: “The theme for this year’s Olympic Day is “Together for a Peaceful World.” Personally, the theme of the Olympic Day means to me that, you know, sports brings everyone together. I mean, it’s something positive that everyone can do together, especially the sports that we’re out there, for example, basketball you know it requires teamwork.”

Bryton Codd, Belize Volleyball Association: “It’s important for organisation because we know that countries across the world, their governments don’t invest in sports the way they’re supposed to and so when you have a federation or a National Olympic Committee within your country that is being supported by the International Olympic Committee then it provides a sense of surety and safety for the federations to be able to carry out its mandates to its athletes.” 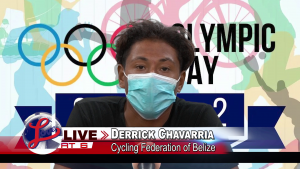 Derrick Chavarria, Cycling Federation of Belize: “The highlights of the Olympic Day is the Olympic Day run. It starts at 3:30 pm at the Civic Center. There’s categories for under 10 to masters. The registration is free. It’s a fun run and you know, it’s nothing too hard. The Olympic Day run is basically to signify the importance of the Olympic Movement so moving together. So basically the three pillars that I spoke about: the solidarity, the inclusion, the equity. Moving together, staying active together, learning together, discovering together and that’s the reason why there’s going to be different  displays out there from the different sporting federations out there to inspire the younger generation.”

Codd says that they will be including new and upcoming sports in Belize such as weightlifting, fencing, sailing and canoeing.