Representatives from Belize participated in the Green Climate Fund’s 32nd Board of Governors meeting in Antigua and Barbuda. There was also a GCF Technical Dialogue for the Caribbean to coincide with the meeting last week. The four-day event brought together National Designated Authorities (NDA), Direct Access Entities (DAE), other funding agencies and GCF stakeholders, to discuss the prioritization of access and mobilizing climate finance and technical assistance for transformative projects. These projects will hopefully facilitate recipient countries in the region to transition to a low-carbon and more climate-resilient Caribbean. The dialogue was also seen as an opportunity for participants to better understand what the fund calls a “climate rationale” to enhance the quality of their projects and programmes. Representing Belize were Director of the Climate Finance Unit of the Ministry of Economic Development, Carlos Pol and GCF Focal Point, Leroy Martinez. 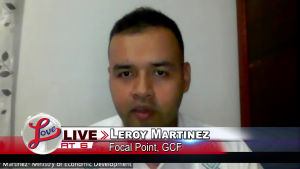 Leroy Martinez, Focal Point, GCF: “We have several initiatives. One of them is that the GCF, likes, controls ownership and this is the reason we’re seeking the accreditation of entities such as The Development Finance Corporation since without the Private Sector we cannot achieve our climate change goals. So we went there to also push or fast track the accreditation at the DFC so that they can support the micro, the small, the medium enterprises so that they can access concessionary prices, low interest rates and grants as well. In addition, we have some other projects with the GCF. We have one that’s building the adaptive capacity of sugarcane farmers in the northern Belize which is for Orange Walk and Corozal. That project is really advanced. It’s in the, GCF provided us with project preparation facility, almost 1.2 million grant. This has enabled us to develop a full fledged proposal. So the Debt Feasibility Study, Environmental Study, Stakeholder engagement. So the NDA, which is the Ministry of Economic Development  and the Caribbean Community Climate Change Centre is about to submit that full funding proposal  to the GCF. This will provide a, once it’s approved by the GCF then we will start the implementation of the project. It’s a $200 million USD project.”

If the project is funded, Martinez says, more than five thousand cane farmers and their families will benefit.

Leroy Martinez, Focal Point, GCF: “Once we have developed that full funding proposal, we submit that to the GCF and the farmers would be the one who would be benefiting the most on this project since it has, like I said, three major components. One of them is that irrigation and drainage. They also, it’s an upscale in the different varieties and looking at how we can implement certain applications that the farmers can use. But, the farmers would be the only ones who would be receiving this from the project. When it comes to consultancies, that stage is done through the PTF so we won’t be hiring consultants. This is like auction, like, uh, the money will be for the farmers, for them to either, like I said, adapt or mitigate to it that impacts of climate change center. The 5 Cs as the delivery partner is the only one who will be receiving an accredited entity so that they can assist with implementation of the project but apart from that, the farmers will be the ones who will be receiving the direct funding from the Green Climate Fund.”