Recently, there has been an influx of undocumented Cubans who have been making their way to Belize through unofficial border entries. The Minister of Foreign Affairs and Immigration, Eamon Courtenay, stated that the government will not sit idly and allow the country’s laws to be broken. Today, he stated that persons have been leaving their countries and migrating to Belize to move north into the US. Courtenay said that this abuses the Refugee system and contravenes the laws of Belize. According to Courtenay, the Government of Belize is devising a strategy for mitigating the unlawful movement of migrants with the implementation of detention centres for refugees. 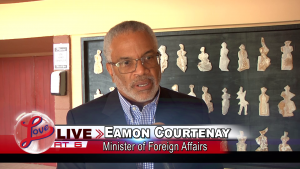 Eamon Courtenay, Minister of Foreign Affairs: “We have spoken to the United Nations High Commissioner of Refugees to say to them that we want to work with them for new protocols and new procedures. One thing that I have put on the table is that we will have to have a detention centre, a place where persons who have applied for refugee status can be put in and held whilst their application is being processed. So, that is something we are considering. I know it’s not popular with certain agencies but we have to look at it. As I have said before, we have a problem in this country with irregular migration. People are leaving their countries for reasons, different reasons, and all of them or most of them are intending to travel north to the United States of America and to use Belize and other countries in Central America as a transit country. When that happens, there’s a lot of exploitation of people. In addition to which, there’s violation of our laws. A person, regardless of your reason, you cannot enter the country illegally and if you enter the country illegally, there is a process that you have to undergo. What has happened, and this is the view of the Ministry of Immigration, is that of late, we have seen an increase in the abuse of the refugee law. People who expressly say that they do not intend to remain in Belize, they want to go north, apply for a refugee status. You cannot be given refugee status if you do not intend to reside in Belize.”