At today’s sitting of the House of Representatives, Prime Minister John Briceño announced that Belize delivered its counter-memorial to the Registrar of the International Court of Justice in The Hague. Belize’s counter-memorial makes a robust defence of Belize’s sovereignty over its entire territory including islands and the pertaining maritime areas under international law.  Following the timetable announced by the Court, which was amended as a result of the pandemic, Guatemala submitted its memorial on December 8, 2020, and is due to submit its reply to Belize’s counter-memorial in December 2022. Belize will then have until June 2023 to submit its rejoinder, after which the Court will set a date for the oral hearings. Briceno says that the hearing is expected to possibly be held by 2024. 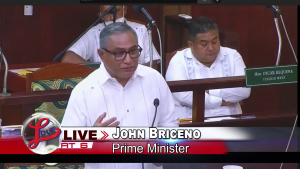 Hon. John Briceno, Prime Minister of Belize: “Our counter memorial provides a strong defense to Guatemala’s memorial or to their claim and resolutely defends the sovereignty, territorial integrity and independence of Belize. Assuming that there are no further delays the court will proceed to set a date for a hearing which I’m advised can occur in 2024 if not before. The Belize counter memorial was carefully drafted by Belizeans in the office of the agent and our external team of lawyers and hydrographer retained by Belize. In keeping with the tradition to keep Guatemala’s claim as a matter of national interest both political parties represented in this honorable house collaborated closely with the external team and the office of the agent. Additionally former Prime Ministers Musa and Barrow, both senior counsel, were counseled along the way. Although rules of court prevent us from disclosing details of the pleadings of either party, Belizeans can rest assured that a strong, clear, and powerful case has been made for our sovereignty over all the territory continental and insular as well as the maritime areas as determined by international law. On the 21st of September 1981 we the people of Belize exercised our right to self-determination. Forty-one years have passed since that irreversible fact when we emerged from colonialism and became a proud member of the world of nations. We were recognized by every country in the world except Guatemala which eventually recognized our independence in 1991. Today we are Belizeans no one can change that. We are sovereign over all our territory and we are confident that no court will change that. The facts, the law, justice, and history are on our side and we are confident that the court will so decide.”