On Saturday, Belize will be celebrating George Price Day for the second time in the country’s history. The public and bank holiday is in honour of the Father of the Nation, the late Honorable George Cadle Price, on what would been his 102nd birthday tomorrow. And, the National Institute of Culture and History (NICH) has installed a photography exhibition focusing on Price’s early years. Curator at the Museum of Belize, Elona Smiling told our newsroom more about the initiative.

Elona Smiling, Curator, Museum of Belize: “Well we are doing an exhibition on George price called George Price the politician versus the man it’s a photography exhibition of what we’re trying to do is trying to show the contrast between him as a politician and him as the man.”

Reporter: And why do you guys feel it was important to highlight his life outside of politics?

Elona Smiling, Curator, Museum of Belize: “Well we wanted to give a little bit of context to his legacy as a politician. We just felt that there was a story within his childhood and his upbringing that did indeed influence the legacy that he had throughout his political career. Well it is important to highlight our political figures especially George Price since he was indeed the first Prime Minister of the country but aside from that he has always had a reputation of being a people’s man or a man of the people. And we’ve seen it throughout the photos that we’ve seen the ways in which he would always be surrounding himself with the Belizean public.. He was a very hands on man if you must say within the photos that we are seeing you would find photos of him gardening, going into the homes, having a conversation with people so we just wanted to give a little snippet of that. I believe we have a total of 30 photos and the exhibition will be up until January 31st .”

Price was Belize’s first Prime Minister and played an integral role in the formation of the People’s United Party, which began as a labour movement in 1950. In an address on this occasion, Prime Minister John Briceno described as a man of the people that was about the people.

The exhibition will be open for public viewing next week from Thursday to Saturday from 9 am to 5 pm. 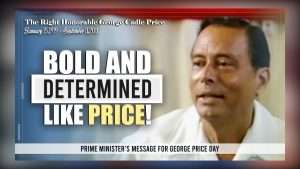 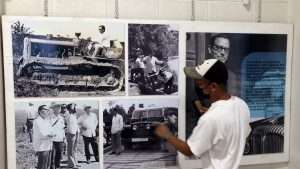