Belize’s female volleyball team is already on the court getting their practice in. Just three days after the conclusion of the Central American U-21 Volleyball tournament, the team is already preparing for upcoming regional games. Today we heard from the President of the Volleyball Association of Belize, Allan Sharp, who says that they are proud of how Team Belize played and that this motivates them to practice harder for upcoming games. 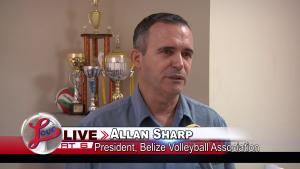 Allan Sharp, President, Belize Volleyball Association: “We are always very cautious in what we want to hope for. Of course we were hoping that everything works out but I was receiving texts from all over the region that Belize looked very strong because we won 3:0 in almost every match even against Honduras which was supposed to be a very strong team, which they are a strong team. But coming up against Guatemala, a very seasoned team, a team that has been able to play matches internationally in major competitions before coming to Belize, I think helped them on the psychological side. They are doing well I think. They obviously wanted goal so bad for Belize, so bad for themselves. But, I think they gave it their all and that’s all you can ask and I think they feel they gave it their all so they’re happy that they did everything they believed they could to try and win. I think the number one thing they can take away is this, although it was a championship tournament they have to learn from this, from every aspect, from all the aspects you mentioned just now, from how they interact to how you prepare for a day. How you prepare to practise and then play at night. This time they’ll be playing all different hours so having that opportunity here recently, they can review that and see how they can improve but in every aspect of the game, we all look back and try to review. And I’m sure that’s being done from the coach’s point of view to make sure that this time around we learn from what certain players can do and what certain players cannot do and different tactics that work and different tactics that don’t work. Also the fans, then fans we ask them to come out. They definitely showed up. For the second time, we filled the Civic Center. I think this time it was almost overfull. There were people all at the top, around the top and we thank them very much for their support.”

The team will depart for Honduras for the Central American U-21 Volleyball Tournament on July 25 and will return on August 4. Sharp says that they are gearing up for the U-23 tournament both physically and mentally.

Allan Sharp, President, Belize Volleyball Association: “Well most of the team will be on the under 23. So now we’ve gone from the under 21 to under 23 so that’s two years older, however, most of our team is still made up of this same under 21 team. Some of the girls have to return to university so we won’t have them but we are taking a team that’s been practising, been training. Our girls, I mean, practised against boys. Our girls practise against the senior teams so they have been practising against girls who are bigger, stronger, boys who are definitely stronger at that age so I think they are ready to meet what they will be facing in Honduras. Again, the difference will be how they handle the pressure of the other teams who have been preparing in a different way and a couple of them have been lucky enough to participate in other international matches prior to this.”