Belize pannist Alexander Evans will be participating in the finals of the PanoGrama. Evans who first began playing the steel pan since 2007 entered the competition with a rendition of an afro beat song. He later advanced in the competition with the song “Welcome to Belize” by Leela Vernon. Evans spoke to Love News,. 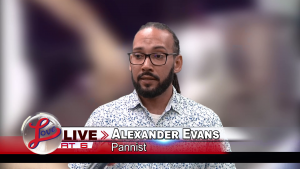 Hipolito Novelo, Love News: You made it to the finals though how does that feel ?

Alexander Evans, Pannist: “It feels surreal. I don’t even think that it’s really quite settled in yet because the moment I found out I made finals it was like ‘Okay now I have to put in some work to get ready for finals.’ but it’s honestly I feel like at this point I’ve already surpassed my wildest expectations and my wildest hopes and my mentality has always been just to do my best and just to try and present the best possible version of myself in the competition, my playing, my arranging, my music and that’s exactly what I intend to do for the finals.”

Hipolito Novelo, Love News: Okay so what goes into that ? Your preparation, your arrangement, your music because you have to chose a good song that people will like.

Alexander Evans, Pannist: “Yes so in terms of song choice for the preliminary round I chose “Love Nwantiti” from CKay which is a very popular afrobeat song and then for the semifinals I wanted to use the platform to really showcase all things Belizean and the song that I chose then was Welcome to Belize by Leela Vernon and so it was almost like I wanted to make a point of using the platform to showcase Belize like I said and I think it speaks volumes to the fact that I made it to the finals playing a Belizean Kriol Brukdown song so I think that really underscores the fact of how much we as Belizeans undervalue our own music because these world class judges in this international competition heard it and heard enough value in it to award me a place in the finals.”

The finals will air on Sunday night on PanoGrama’s Youtube page.