After two very long years, Carnival is back! The announcement was made today by Minister Francis Fonseca who is the chair of the National Celebrations Commission. This year’s Belize’s Carnival Road March will be celebrated under the theme “Carnival 2022! We outside! We back pon the road!” Fonseca says that the road march is expected to be as grand as it was pre-covid-19. 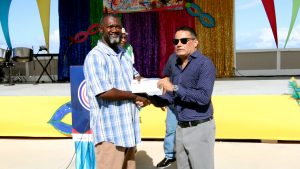 Francis Fonseca, Chairman, National Celebrations Commission: “Over the past year in particular, the most frequent question I’ve gotten in my capacity of the Chairman of the September Celebrations is, “Dah when di Carnival ah come back?” We’ve got it this year. We will have it this year so, as you know, the people who are here today are really the engine that makes carnival work. They’re the heart and spirit and, you know, they’re the ones who are passionate about carnival so all credit to them. They are the ones who have pushed it and we are just here to support them, facilitate them and as I said, provide them with some seed capital to get the thing flowing and, you know, they’ve shared with us their budget for this year and we’re going to work along with them to provide as much support for them as possible. So far as, because again we’ve been in discussions as well, because we are responsible people, with the Ministry of Health, up to now Danny*, as well you know these are uncertain times, so things can change but as of now, we should return fully to pre-pandemic carnival and of course, you know, everybody is of course free to take their own precautions. You know, if you want to wear your mask, wear your mask but there is no requirement for that so it’s a full return. That’s our hope and we certainly hope that that doesn’t change over the next few months. We really have to take carnival to another level. We’ve been talking about it for years and years and years. In many other jurisdictions, in many other countries, you know carnival is a big economic product and there’s no reason that it can’t be the same here in Belize. So, we’re working along with the BTB and other stakeholders in culture to see how we can make events like carnival big national and international events that attract people to Belize. So I think there’s a lot of work to be done but I think we have a good association and we have a good strong working relationship with them.”

This year’s Carnival Road March is scheduled for September three. According to Leroy Green, spokesman of the carnival bands, preparations are already being made by carnival camps across Belize City.

Leroy Green, Spokesman, Carnival Band: “This is something we’ve been for from the pandemic hit us and right though it, that was the question that kept going through our minds: When will it be back? And so now that it’s back, it’s with a feeling of anticipation. A feeling of excitement, a feeling that yes, now we can get those creative juices flowing because as I’ve mentioned in the ‘Desire for Mother Nature’, we already came up with a theme so we are ready and I believe a lot of the bands are and we really hope that, this year, it’s just a jump start and we hope that with the coming years, carnival will not only be focussed in the Belize City but will become a truly national carnival where bands from other districts can come in and participate because when I hear the term Belize Carnival, I think of the country not just Belize City. I also see this new beginning as the beginning of something exciting. The beginning where, working along with the Minister of Tourism, the Minister of Education and other agencies, I can see carnival, if we’re really focused, becoming a big tourist attraction for Belize and through tourism, becoming a big revenue earner because I think that’s the direction carnival should go. So I’m looking at this comeback as the start of that entire process.”

Minister of Education and Chair of the National Celebrations Commission, Francis Fonseca handed over a check for twenty-thousand dollars to the Belize Carnival Association. 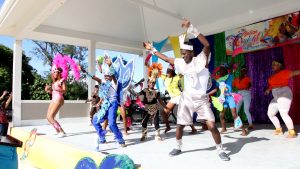