Belize’s National Rugby Team – the Camazotz will be competing in their second international tournament over the weekend. Today, the team departed for the Bahamas where they will compete alongside twenty-three teams from across the world in Rugby Americas North 2022 RAN Sevens Qualifiers tournament. The winners of the event will advance to the Commonwealth Games and Olympics. Tony Gillings, President of Rugby Belize, says the team is expected to be a major contender in the tournament despite being the new kids on the block.

Tony Gillings, Founder & President, Rugby Belize: “This competition we’re going to is called the Rams Qualifiers and what it is is a qualifying event for the Commonwealth Games and the next Olympics. So there are about 23 different teams competing this weekend and we’re all vying for a spot in the Commonwealth Games and or the Olympics. Now Belize is all newcomers. This is only our second international event and so we’re probably not going to get one of those places but really, for us, it’s all about the participation. Yeah, the exposure. The more international games we get, the better we get because obviously it’s difficult for us to travel overseas to play games and it’s more difficult for teams to come here. So I’m hoping the guys will go there. They’ll enjoy it. They’ll get a great experience. We’ll get great exposure and we’ll get some points in the international rankings. On the first day, Saturday, we’re playing three games because there are four pools. So you have to get out of the pools first and on Sunday you play for plates and cups and shields. For us though, to be honest, Canada is probably going to get one of the Commonwealth spots and Jamaica is probably going to get the second. Why do I say that? Because Canada is a Tier 1 rugby nation. They have just been playing in the HSBC Rugby series so they’re more likely to get the first spot. Jamaica amongst the Tier 2 countries is probably the next best qualified one for the Commonwealth Game and we’re up against Mexico and a number of other countries too and most of these teams are professional rugby players or semi-professional. We in Belize are just amateurs. So this is going to be our second international. The guys have done really really well so far. I’m super proud of them and I think as long as they win a couple of games and get some points on the board, I’ll be happy with that. “

The team is named after the Mayan God “Camazotz” which translates into “The Bat God.” According to Gillings, its thirteen members are the best from across the country.

Tony Gillings, Founder & President, Rugby Belize: “We selected a national team a number of months ago. What I did, I asked the coaches from each of our six district teams to nominate their best players. So they nominated them and then for the last four or five months, we’ve been training every single Sunday. Whether it be in Belize City or Orange Walk or other places to make the team gel together because rugby is a team sport. There’s no one individual star in a rugby team. It’s about the team. So we’ve been working every Sunday to gel the team together. We’ve got some excellent talented rugby players in this country. We really do so I’m hoping that we’ve done enough work. When we get to Nassau on Friday evening, we’ll do another training session because most of the teams will be training anyway and then, yeah, the team that will be going forward because this will not be the last one. We have the Commonwealth Games in July and then we’ve got Mexico City in November. So the guys have been really training and even when they’re not training in the team, they’re doing their own stuff in home gyms and local gyms to build their stamina because of course rugby is a lot of running. It’s very physical and when we get together on Sundays we do drills like learning how to do the scrums, the lineouts, how to do teamwork and all those sorts of things so they’ve done really well so far.”

On Saturday, Belize will play against Barbados, Bermuda, and the Dominican Republic. The games will be streamed live on the Rugby Americas North Facebook page./// 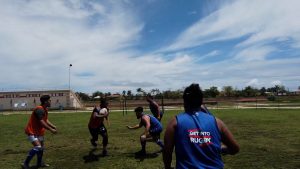 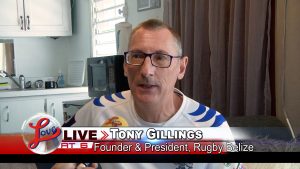