Today sergeants, constables, and corporals of the Belize Police Department took to polling stations all over the country to elect a new Police Association Central Board. The yearly process was held once again to select the seven representatives of the association, who are responsible for the welfare of officers country-wide. The current Chairman of the Association, Sergeant Jermaine Hyde spoke about today’s election process and the work done under his leadership.

Sgt. Jermaine Hyde, Chairman, Police Association: “ Out of the seven members that were the members of the central board six of us are bidding again. Hopefully we are reelected so we can continue the work for the members of the Police Department and the members of our association. It wasn’t easy I mean as you know we are still in a pandemic. We have seen last year 2021 a number of police officers have gotten infected with the virus and as a police association. We are the police association central board we tried our best to assist our police in terms of getting care packages for them. We also tried to have as much activity as possible In terms of there was a Mother’s Day drive that we did, we tried to reach out to mothers who are police officers and give a gift around Mother’s Day. We try to address welfare issues on a daily basis and health a lot of police officers have health issues. We try to see how we as a central board and the Commissioner’s Office works closely to see how we can assist those members in terms of getting care for their health issues. As you know presently we also partner with the ministry of national resources through the minister to see how we can get land for our members. There is presently a lens scheme that we have forward some applications about over  400 applications to the ministry of natural resource and we are presently in that process of trying to acquire land for our members.  So we have been doing a number of things and we want our members to understand that we will continue working for them if elected and hopefully that will be revealed at the end of the day.”

Hyde went on to speak about the low turnout for today’s election that according to him is mainly attributed to a high number of police officers that are out due to COVID-19.

Sgt. Jermaine Hyde, Chairman, Police Association: “Looking at the numbers so far the turn out is very low but that was expected because a number of police like I mentioned have COVID-19 at this present moment and again we’re trying our best to see how we can help them and also the fact that the timing in terms of shift, some people came off this morning and police officers who have worked 8 hours it’s hard for them to get up and come out and vote but we understand and it’s something that we’ll have to work with but we expected the number to be a little bit low today and we’re seeing that. Presently there are ten members vying for the seven seats because there are seven members of the central board and there are ten persons vying so out of that 10 seven will be elected. Six of them I said was a part of the central board last year one member decided not to run this summer around and for their own personal reason and we respect that. We have a seven man slate so it will be myself Sgt.209 Germain Hyde, Sergeant William Usher, Sergeant Gilbert Martinez, then we have Corporal Reina Mendoza, Corporal Shelene Myers and Corporal Peter Romero and we have one Constable on our slate who is PC Lorenzo And there are three other persons I will mention their name Mr Kenrick Bol, PC Carolyne Flowers, and PC Kingston and I wish all of them the best of luck too. I mean It’s not about competing it’s about getting those people who want to look out for the welfare of police officers and I believe any one of us that are elected today will look out for the welfare of our police and we can work together regardless if it’s my seven or the other three.”

We’ll have more on the outcome of today’s election the news tomorrow. 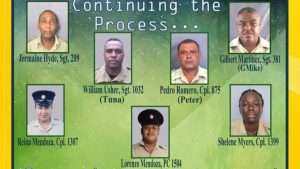