The Premier of the British Virgin Islands Andrew Fahie (foy) was arrested on drug charges in Miami on Thursday of last week. Premier Fahie had agreed on a seven-hundred-thousand-dollar payment to allow drug traffickers to use ports in his country. The agents from the Drug Enforcement Administration (DEA) posed as cocaine traffickers, connected to the Mexico-based Sinaloa cartel. Fahie, a BVI port official, Oleanvine (oh-len-vine) Maynard (may-nerd) and her son, Kadeem were charged with conspiracy to import more than five kilos of cocaine into the US and conspiring to commit money laundering. Here’s a report by Sky News, summarizing the most important developments.

Since Fahie’s arrest, the report by a Commission of Inquiry on the country’s governance has issued a 937-page report. The most important finding by the commission, spearheaded by Sir Gary Hickinbottom, was that corruption in government was rife. As a result, the commission recommended, among many other things, that the country’s constitution be suspended and that its National Assembly be shut down for at least two years. For its part, CARICOM says that the country should take into consideration the commission’s recommendations to improve governance. However, the regional grouping says that it is quote “…deeply concerned by the Report’s recommendation to suspend those parts of the Constitution by which areas of government are assigned to elected representatives and taking the retrograde step of restoring direct rule by the Governor in Council as existed in Her Majesty’s colonies during the colonial period. CARICOM added quote “The imposition of direct rule, and the history of such imposition in the Caribbean, was never intended to deliver democratic governance or to be an instrument of economic and social development of our countries and peoples. The grouping also argues that any decision by the United Kingdom to impose direct rule is inconsistent with the UN Universal Declaration of Human Rights. As it relates to the overall proposal to suspend the constitution on the island, the acting Premier Natalio Wheatley and many organisations, including the OECS, have flatly rejected the recommendation. 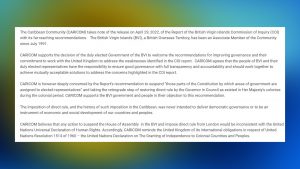