Turning away from the minimum wage discussion: former grassroots activist and journalist, Giovanni Brackett has been hired by the Briceno Administration as an information consultant. Prime Minister John Briceno told Love News yesterday that Brackett’s work is important to the government’s understanding of national issues. Today, Cabinet Secretary Stuart Leslie went a bit further to defend GOB’s position to hire Brackett. Not only does Brackett’s prior work makes him qualified for the post, Ambassador Leslie indicated that his work is part of a wider government policy initiative. He also said that the media should have celebrated Brackett’s achievement. 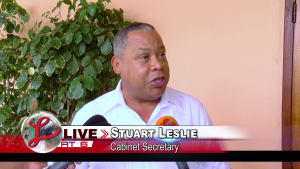 Stuart Leslie, Cabinet Secretary: “I was kinda surprised when I found out that the fraternity that Giovanni came from meaning your fraternity journalists were questioning so arduously this decision because he’s one of you in fact I think he worked at Channel 7 for a while and helped out in another media and I would have thought that you would have been happy to see one of your own get such a contract. I think that Giovanni brings a wealth of talents to this job. If you listen to speeches that were given by people like Minister Musa or the Prime Minister, Minister Fonseca you will hear about this concept that we’re trying to do as this whole of government approach to key issues especially some of the social issues. I think Giovanni is very qualified, very experienced through his advocacy work in working with some of these social issues. Now the press office can’t handle everything. There have to be certain consultancies that the press office will hand out, consultancies that deal with some of these social issues. I can tell you for a fact Giovanni reports to me as well as to others that he does a lot of ground work dealing with at risk youth, with mother who have families who’ve suffered death because of thier sons being murdered and so on in fact Giovanni sits on the Board of Directors in the Ministry of Human Development I think on women’s issues. So he has been working on those things quietly not making a lot of noise but if this government is going to be a government that listens then we have to hear what other people out there are saying not just the leaders and the political people that work everyday together but from activists like Giovanni and others.”

Leslie went on to say that Brackett’s employment supports the work of the Press Office, which is currently headed by Michael Rudon. He also explained that Government is making space for a new generation of thinkers.

Stuart Leslie, Cabinet Secretary: “That generation of people, of great Belizeans that have worked hard like somebody like a Nuri Mohammed, like James Murphy who worked in the area of developing strategies to deal with young people at risk those guys are not as young as they used to be. We need to develop another generation of people who can listen and can talk. So this is what we were thinking about when we reached out to Giovanni to come and work for us. Now with respect to the salary guys listen this is a two year consultancy contract, nobody knows what will happen at the end of the two years. Giovanni will not get any massive, he doesn’t have any benefits that he can look forward to after that or any of those things and yes there are public officers who may say well we earn less but those established public officers can look forward to pensions and they can look forward gratuities and other things that Mr.Brackett will not be able to look forward to and so I support this initiative by the office of the Prime Minister to work with Giovanni and I hope that good things will come from it. In fact I believe it’s already bearing good fruit.”

Outside of Brackett’s not receiving a pension in the long run, Leslie argues that Brackett’s work will help GOB put its policy view into sharper focus, particularly in these challenging times. He insisted, however, that a public tendering process for this contract was unnecessary. As it pertains to comments Ambassador Leslie made, Alfonso Noble reached out to our newsroom and has vehemently denied that he was ever hired by the Press Office under the last administration. It seems to Stuart misspoke.