Cabinet ministers met for its weekly session on Tuesday and discussed several national issues. The first had to do with National Health Insurance (NHI). Love News understands that the executive team of NHI were invited to discuss with cabinet, the NHI’s role in reforming the health sector. Additionally, Cabinet got a briefing on the implementation and performance of the NHI services in several areas of the country and its positive impact on these communities. According to a briefing from the government, plans for the further rollout of the NHI Program, as outlined in Plan Belize, was also discussed and Cabinet will decide on the way forward after further deliberations. Another item on the agenda was a protocol that will seek to amend the Revised Treaty of Chaguaramas. This is in relation to the issue of the current implications of who is a CARICOM national for which Cabinet gave its approval for signature of amendments to Article 32 of the treaty which defines a CARICOM national. This amendment will be signed at the Thirty-Third Intersessional Heads of Government Meeting to be held in Belize on March 1 and 2. The third discussion was the Misuse of Drugs Bill, titled the Cannabis Control and Licensing Bill, 2022. Cabinet has given the green light to introduce revised legislation that will provide for the control and licensing of the cannabis industry and to establish the necessary legislative framework to govern and regulate the cultivation, processing, distribution, and delivery of cannabis products for adult use only. Cabinet is also looking to strengthen legislation and enforcement measures aimed at penalizing price gougers through the implementation of stiff fines using a ticketing system. AS it relates to the Covid-19 pandemic, Cabinet was informed that there are more than 299,400 vaccines on hand. As of 14th February 2022, 213,679 persons or 49.76 percent of the total population had received at least one dose of the vaccine and 205,678 or 47.81 percent of the total population has been fully vaccinated. Also, 30,671 Belizeans aged 12 to 17 years old have received at least one dose of the vaccine and 25,351 two doses. Additionally, over 35,449 booster shots have been issued to date. Boosters are now available to everyone (including those 12 to 17 years old), who have been fully vaccinated for three months or more. 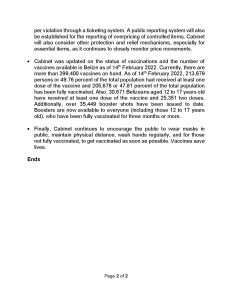