And while the leaders of Cuba, Venezuela and Nicaragua were not invited, one Belizean was. Executive Director for United Belize Advocacy Movement (UNIBAM) Caleb Orozco, is in Los Angeles California participating in the Summit. Orozco told Love News that he does not have confidence that the Summit will produce any substantial result. 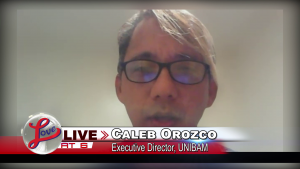 Caleb Orozco, Executive Director, UNIBAM: “When I arrived the person at the table said “Sir your name is not on the list and we cannot find your badge and so we can’t help you.” and so I moved over to a second person the same thing was repeated. With a little work I was able to find out that I was on a master list and when I returned the same staff member who said “But sir you’re not on the list.” she says “Well it’s not my job to find his name on the list.” speaking to an OAS staff member. She moved us over to a table that is literally two feet away and she had to be instructed to put my name on the list because there was a master list and there was a third person I believe a staff member who essentially says “Are you Caleb?” I said “Yes, thank you for smelling me.” and she picked up my badge in less than thirty seconds. Now I share this story with you because — have to be tenacious in an environment where staff members are incredibly dismissive and indifferent to the issue of participation. For me the idea that these two people are complicit in a wider system that is designed to exclude our representation is troubling because these are the kind of people who represent us or who are representing the political environment who could give a damn about pain and suffering and the vulnerability of people on the ground. It shocks me and scares me to know that some of our politicians are just like these people. So my expectation of this conference to say that it will change the world and it will advance reform on the ground is ridiculous and naive.”

Orozco says that he is attending the Summit to broaden his network so he can do his job more efficiently to face head-on the challenges that vulnerable populations face.

Caleb Orozco, Executive Director, UNIBAM: “For me the state has demonstrated it is not prepared to put its money where its mouth is. For me the state especially Cabinet have not shown principal leadership in ensuring that exclusion is not the practice but the exception. I’m waiting as a citizen for Cabinet to demonstrate that I as an LGBT citizen is no longer a second class citizen in this country. The idea that members of Cabinet would say that my need for full, clothing, shelter, my concerns or vulnerability to poverty, my concerns to the same access of health outcome and relationship security is controversial is hypocritical because those are the same thing every member of Cabinet has enjoyed most of their lives but never needed to work for it. So I expect that the images that I send on my social media people I meet can be leveraged to support the change that I want as a citizen and in service to my country.”