Journalists from across the country can win up to ten thousand dollars in the first-ever Belize Investigative Journalism Competition. It’s a contest that will test reporters’ abilities to write, produce and tell a story about a contemporary issue. Radio, television, newspaper and online reporters will have to produce their pieces between now and the end of the year. The coordinator of the competition is Belizean-born journalist and writer, Holly Edgell. She spoke to Love News this morning about why this is important. 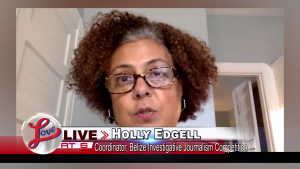 Holly Edgell, Coordinator, Belize Investigative Journalism Competition: “In speaking with a number of people whenever I’m in Belize people knowing I’m a journalist are always talking about Belize should do more investigative journalism and there are a number of like-minded people like myself who decided to come together and make this happen. I think that one of the things that inspires this kind of prize, and it’s a pretty big prize, is to give journalists the opportunity and hopefully with the backing of their media houses, their editors, their publishers, their producers to take the time to really do a deep dive into an issue of the importance of the country. So this is a time to really interview people in depth, review records, exercise your rights as journalists to Freedom of Information which is every Belizean’s right and really unpack if you will to use a common inspection an issue that could be happening in plain sight but no one really has explored it or it’s an issue that has been spoken about, reported on in a day-to-day news format but not really the issues and the context behind it so we hope that this inspires that kind of work.”

What is the judging panel looking for? Edgell told us that it’s more than just spelling, grammar and punctuation.

Holly Edgell, Coordinator, Belize Investigative Journalism Competition: “The judges will be looking for overall I think just a very well told narrative whether it be in print or in the broadcast format whether it be online or in a magazine but within that we do have some requirements. We need multiple sources, we want to see corroboration you look through records or other sort of concrete statements by officials or other interested parties like in any journalism you can’t just make an assertion in your writing without backing it up so that’s doubly important. We are looking for grammar, punctuation, correct facts whether it be the year something happened or the spelling of someone’s name we’re going to be rigorous in checking all of this information so we’re really hoping that the editing and review of this work will be rigorous on the part of the fellow journalists’ editors, producers etc. We also want this to be done by Belizean journalists about Belizean issues. We don’t want this to be an opportunity to grind axes or to target or to put out an agenda but at the same time we do feel that in every aspect you can think of in Belize life there is something to look at and examine. It may not be pretty but it definitely needs an examination.”

According to Edgell, investigative journalism should be an important part of the democracy of Belize. She explained that this type of reporting provides a special opportunity to ensure there is accountability.

Holly Edgell, Coordinator, Belize Investigative Journalism Competition: “I think investigative journalism has a unique power to hold people accountable in a way that perhaps covering an issue as the news breaks or because there’s a press conference or because there is a car accident in a way that doesn’t serve the public so I think this kind of work also injects into the daily grind I think a sense of investigation. I don’t know if Belizeans know how hard their journalists work every day covering multiple stories running from press conference to crime scene, coming back, writing up their work this is a lot to do and I think that if an investigative state of mind can be sort of injected into not only the journalists but their editors, their producers, their publishers there will be perhaps more attention paid to some of the finer details that are the cause and the context for some of the things that we see happening in the country.”

Pieces should have been produced between January 1 and December 31, 2022 to be eligible for the prizes.