Most Caribbean Community member nations plan to attend the Summit of the Americas. This was confirmed to Love News by the Chair Pro-temp of CARICOM, Prime Minister John Briceno. Latin American leaders including Mexican President Andres Manuel Lopez Obrador have threatened to skip the summit, which starts on June 6 in Los Angeles, if the United States does not invite Venezuela, Cuba and Nicaragua. But despite some countries’ call for a boycott, Briceno says that it’s in CARICOM’s best interest to participate. 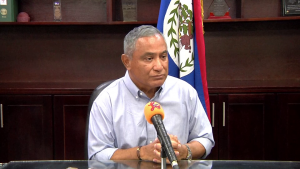 John Briceño, Prime Minister of Belize: “Nicaragua has expressed, has said outrightly, they have no interest in attending this summit and Venezuela, it seems that Venezuela and Cuba will not be invited. At the last meeting that we had, where we discussed that in, the few of us that were in Guyana, we felt that with the discussions that we’ve had with different people in the United States Government, with their Special Envoy, Former Senator Christopher Dodd, we’ve been back and forth insisting that we want everybody to be included and for different reasons, it’s the, what the U.S. Government has said that, that, that they will not be able to invite everyone and of course, Cuba is not going to be invited and so is Venezuela. And what they’re doing, they’re starting, because of the lobbying efforts that we’ve been doing on behalf of Cuba, that they’re starting to ease up some of the sanctions like allowing remittances to be able to go into Cuba, to allow more flights to be able to go to Cuba and probably even cruise ships that will be able to create more economic activities for their people. But, unfortunately, they believe that at this point, they will not be able to invite Cuba. After long discussions about us in Cabinet, we’ve, in CARICOM, then we’ve decided to allow countries who want to participate to attend this Summit of the Americas. I just checked with the Secretary General Carla Barnett and she said so far seven countries have already committed to going to the Summit. So, Belize have, we have agreed that Belize will attend the Summit. It’s scheduled at the 7th I think of June.

Hipolito Novelo, Love FM News: Okay so despite the calls of inclusivity, it would be in CARICOM’s best interest to participate in that SUMMIT right?

John Briceño, Prime Minister of Belize: “Well there’s a lot of issues that will need to be addressed in the region. Certainly the issue of COVID. The issue of lack of vaccines for children. That is where we are as we’re seeing now another wave, probably it’s going to be the 4th wave attacking the region and Belize is no expectation. We’re seeing that this time sound that a lot of children are being affected and that’s why we’re seeing that it is important for us to have access to vaccines. We’re almost at, we’re at the position, I think we should be getting the vaccines for kids anytime now, probably this week or next week we should be getting them and so we need to talk about that. We need to talk about the economy, the rising costs of goods in the region. We need to talk about the level of debt that countries especially developing countries like ours have been incurring because of the pandemic and what kind of support can we get from the developed countries so there are pressing issues that we need to discuss. Migration is another one and so many countries believe that it is in our interest to be able to attend.”