The Caribbean Financial Access Roundtable held in Barbados concluded with concerns raised about the vulnerability of the Caribbean to money laundering and terrorist activities. The 1-day event facilitated U.S.- Caribbean trade discussions among key stakeholders on the financial de-risking of the Caribbean. The event was attended by CARICOM heads of state, industry experts and U.S. policymakers including US Congresswoman Maxine Waters. Also participating was Belize’s Prime Minister John Briceno who is currently CARICOM’s Pro-tem chairman. PM Briceno says that de-risking efforts have led many U.S. banks to sever ties with their Caribbean affiliates, resulting in significant economic disruption to countries and businesses in the region. 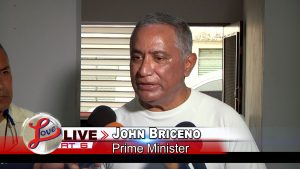 Hon. John Briceno, Prime Minister of Belize: “The issue of correspondent banking, the relationship that we’ve had with some of these banks for decades have been abruptly cut. Belize has lost 33% of the corresponding banking relations that we had, the different banks in the United states even the Central Bank has lost their one. Presently the Central Bank has,  our Central Bank,  has a banking relation with Crown Agents and Crown Agents is listed probably around 4,200 or something in the world in the number of banks and the IMF and other IFIs have pointed out to us why is it that you are banking with crown agents ? And we’re telling them well we have no option we wish we could do something else. For the first time we had US representatives and one as powerful as Maxine Waters to come to us to hear what our issues so several of us Minister, heads of governments and myself as the Protem Chairman of CARICOM went and then spoke to her and several other banking officials were there – for instance of senior vice president for Wells Fargo who is a native of Trinidad and Tobago who could appreciate what we’re going through , listen to us and we described what we’re going through and in many instances they were not really aware. The problem is that Congress in their efforts to be able to curb the flows of financing from drug traffickers, money launderers, arms dealers and terrorism passed some very strict laws in the American banks that they are charged millions and in some instances over a billion dollars  they can be fined for managing these illicit funds and what these banks have done they have looked at Belize for instance let’s use Belize as an example the former governor of the Central Bank pointed out to me that we had services Central Bank with Bank of America and Bank of America was earning about $3 to $4 million a year and when Bank of America looked at the risk of providing us these services as opposed to the profits that they can make they felt it was a risk that they would not take so it’s called de-risking-  that’s how that word de-risking has come about. So all of these banks have been cutting their services, the risk is way too big for the profits that we’re going to make. I pointed out to representative Maxine Waters that I believe that these banks have been doing business with us and the Caribbean for decades and I believe that  they should not only look at the profits but also that I believe that they have a moral responsibility to provide these services for us. If they cut these financial services for us in the Caribbean we are dead. How is it that Belizeans in the US can send monies to their family here? How is it that we can pay for the imports that we are doing? How is it the people that want to buy from us in the tourism industry how can they pay us if they cannot transfer these money? So it is clear a present danger for our citizens in the Caribbean and also for Central America and some of the smaller African nations.” 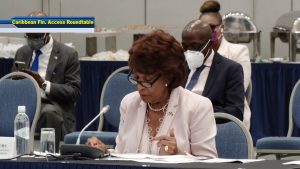 Several CARICOM leaders echoed the call for greater cooperation between America and the Caribbean concerning banks and resolved to address existing regulatory issues. The Roundtable is to be followed by a Caribbean-US Banking Forum in October of this year. 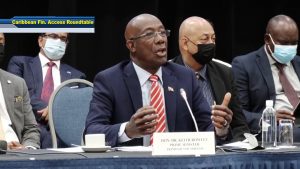