Regional leaders are set to converge on Ambergris Caye come next week as the 33rd Intersessional Summit for CARICOM is slated to be hosted by Belize. CARICOM’s Secretary-General, Dr. Carla Barnett spoke on her sentiments on the meeting since it is being conducted in her home country. 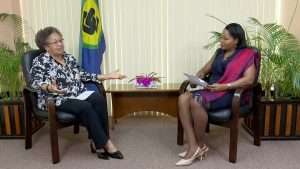 Dr. Carla Barnett, Secretary General of CARICOM: “Very significant, it’s, it’s significant for me because obviously because I am from Belize and it’s going to be my pleasure to welcome heads, colleagues from the Secretariat, delegations from all member states to Belize. The meeting is going to take place on San Pedro which is Ambergris Caye, which is an offshore island, and for us Belize it’s going to be a pleasure to welcome the dignitaries from the Caribbean and for me it will be double a pleasure because you know it’s kind of poignant, it’s kind of, you know, very special to be able to do that. There’s going to be a meeting immediately following the CARICOM Heads of Government meeting. There’s going to be a CARICOM-SICA meeting which is a meeting of the two large integration groups in Central America and the Caribbean. And the reality is that the CARICOM countries and the Central American countries together probably circle the Caribbean Sea and, therefore, there’s a commonality there that we have to recognise and see how we can we work together better to get mutual advantage out of that and so there’s a long conversation that has taken place about increasing collaboration and cooperation between Central America and the Caribbean. The Heads meeting takes place in Belize. Belize is uniquely placed because Belize is a member of SICA and a member of CARICOM and so, who knows, maybe we get enhanced cooperation coming out of the meeting as well? “

Dr. Carla Barnett also spoke on the effects of the Covid pandemic on a regional front and what have been some of the lessons learned.

Dr. Carla Barnett, Secretary General of  CARICOM: “I think what the COVID pandemic has emphasised for us is the real importance of being able to support one another, combine our efforts in economic development, invest in each other’s countries, making sure that where there are opportunities, those opportunities are shared. Where there are risks, we address them together because at the end of the day, within the CSME, that’s really about our future and we learned it as we battled to get access to vaccines for example. We learned it as we had to treat with the food security issue that at the end of the day, we have to take care of ourselves and one of the key parts of taking care of ourselves is ensuring that we develop the CSME as best we can and yes we admit upfront that there have been delays in implementing key aspects of it. I was a part of a discussion a few days ago with the Prime Ministerial Sub-committee and I would have to tell you that every single Prime Minister, every single minister, every person around the table recommitted to CSME because people understand, more than ever now, that in fact it is critical for us to get the CSME going and properly because the advantages are there.”

According to Dr. Barnett, one of the key topics on the agenda for the summit is agriculture and food security.

Dr. Carla Barnett, Secretary General of CARICOM: “One of the things that happened as a result of the pandemic, in our member states and globally, a lot of persons who had a little bit of land decided to grow food because, 1. They had to use their time productively and 2. As incomes fell, the need to have a little bit of fresh fruit and vegetables, you know, if you could grow it yourself it was helpful. So we saw that in as much as we saw it in other parts of the world, we saw it in the Caribbean. We saw little businesses of all kinds grow as a result of needing to find productive ways to use your time and needing to generate some level of income when the normal income sources had fallen. So yes, we would have had some glut somewhere, some shortages. We’ve always known that we have a transportation issue in the development of the CARICOM single market. If you can’t get factors of production: people, finance, labour, if you can’t get the factors of production to move then you really can’t talk about taking advantages in different places and, therefore, the transportation of people and the transportation of products comes really important and that’s high on the agenda this time. I know that we’ve talked about it several times in the past. I think again because of the impact of COVID and the disruptions that occurred, transportation of food in particular is really on the agenda but not only food, food and people. So if there’s a glut in St. Vincent there really is no reason for that extra not to go to St. Lucia or Barbados or some other place and the ministers of agriculture have been, and the officials have been talking about all of the things that need to be sorted through, phytosanitary stuff for example, to ensure that we manage the movement in such a way that nobody’s agriculture sector is compromised but at the same time, the food has to move and so that’s high on the agenda and is linked very closely with the matter of food security and increased food production.”