Leaders of CARICOM are in Belize for the 33 Inter-sessional meeting slated to begin on Tuesday at the Grand Caribe Resort. The last few days saw the arrival of several leaders including the Honorable Philip Davis, Prime Minister of the Bahamas; the Deputy Prime Minister of Saint Vincent and the Grenadines, Honorable Montgomery Daniel; Prime Minister of Dominica, Honorable Roosevelt Skeritt; the Premiere of Monsterrat, Honorable Farrell and the Duty Premier of the British Virgin Islands, among others. The meeting will be chaired by Belize’s Prime Minister John Briceno who will oversee the discussions on key regional matters. The opening ceremony starts at nine o’clock on Tuesday morning and will feature remarks from CARICOM’s Secretary-General, Dr Carla Barnett; outgoing CARICOM Chairman, Prime Minister of Antigua and Barbuda, Honourable Gaston Browne and the current Chair, Belize’s Prime Minister Briceno. Heads of Government will tackle several important challenges facing the region including the impacts of the COVID-19 pandemic, the advancement of the CARICOM Single Market and Economy (CSME), climate change and the region’s security. It is expected that Russia’s invasion of Ukraine will also be discussed, which we were able to ask Dr Carla Barnett to confirm. 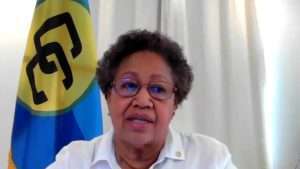 Dr. Carla Barnett, Secretary General, CARICOM: “With regards to the Ukraine situation, you would know that the community has already issued two different statements. One before the invasion calling for calm and the other one after the invasion to ask for a return to diplomacy as a means of settling disputes, settling international issues and those, those considerations go deep to the core of what CARICOM stands for. The principles of territorial integrity, of self determination, of the use of diplomacy and international relations to settle rather than going to war. That’s really fundamental and I will expect that that will continue to be the case. In addition to the statement issued by the community, as a whole, we’ve had a number of individual member states issue some similar calls for cessation of hostilities, for return to diplomacy, for a step back from war because of the, not only the wrongness of it, but the impact, not only on Ukraine but on the international community and on the economy as well. So that may arise. It is not an issue that is currently on the agenda but it is a matter that the community has been discussing and has been making pronouncements on, particularly through the statements that we’ve issued. You also asked me about whether or not we’ve been asked to provide peacekeeping in Haiti. We’re not at that stage internationally. I don’t think that there’s a decision that’s been made at the level of the United Nations to do that and that’s where that kind of decision would be made by the international community. If and when that decision is made then we would consider that as well but that’s not a matter that we would take on as CARICOM on our own. It would need to be part of an international community.”

It is also expected that regional leaders will discuss CARICOM Agri-Food Systems Agency, with emphasis on regional food and nutrition security. The agenda will also include climate change action following the recent COP-26; the security situation in the region and the current situation in Haiti. The CARICOM Summit will wrap up on Thursday and on Friday, the CARICOM-SICA Summit will begin. Belize sits in a strategic position as the country forms a part of the Caribbean as well as a part of Central America, making it a member of both CARICOM and SICA.

Dr. Carla Barnett, Secretary General, CARICOM: “The reality is that we’ve not made as much progress as we would have wanted. The two integration movements set out a plan of action in 2011 that we are pursuing. The expectation is that this meeting of CARICOM and SICA as two different integration movements will see a reinvigoration of the plan of action. There’s an undertaking that the revised updated plan of action will be agreed. There’s been intense discussion between CARICOM and SICA over the last few months and so we’re expecting that there’s an invigorating, but this is an invigorating point in time. You would appreciate Marisol, that Belize is in a unique position being the only country that’s a member of both CARICOM and SICA and therefore this, at this appointed time, there’s a feeling that the timing is right for there to be an acceleration and agreement on moving forward because that’s what we’re seeing as necessary for both integration processes and for both sets of countries to advance at this time. I do expect the meeting to be a productive one. This is the first face to face meeting that Heads will be having since the 2020 meeting because of the impact of the COVID pandemic so there’s a desire. There is an expectation that Heads sitting around the table are going to be able to discuss a lot of important matters critically. The issue of agriculture on the agenda, we are expecting progress on that. The key objective there is to place the community in a position to reduce the import of food into the community taking into consideration the fact that the pandemic and the disruption of shipping caused some uncertainty about food supply and therefore we’re expecting that Heads will make even more progress in terms of crafting a response to stimulate agricultural production across the community. There is also on the table of course, also the expectation that Heads will hear progress in the area of the reduction of roaming rates across the region, particularly the East Caribbean. We’re going to be finding out where we are on that. I know that there is a tendency for the media sometimes to refer to the meetings as a lot of talk and no action but you know there has to be talk to agree on the action to be taken and if we were to look at the things we actually do, there is quite a bit that we’ve done in the past so let’s move forward and let’s see us get these meetings done in a productive way.”

It is also expected that the UN Secretary-General António Guterres would be a participant during the Inter-sessional meeting but with Russia’s invasion of Ukraine, the media ask Dr. Barnett if that is the case.

Dr. Carla Barnett, Secretary General, CARICOM: “As we speak, the Secretary General is still on the agenda, still planning to come. There’s a general assembly emergency session that’s been called. I don’t know what the stage of that will make an impact but his visit was to allow him to have conversations with CARICOM and SICA on a number of issues, climate change, COVID, financing for development, those kinds of issues that we’re going to be talking about and we hope that he will be able to come physically. If the circumstances do not permit then, you know, there’s really nothing we can do about it but we do at this stage still have him coming to Belize for that meeting, yes, and the Argentinian government is not coming in person. His intervention would be virtual.”