The fishing community of Caye Caulker Village is up in arms over the new regulations set out by the Fisheries Department. The fishers say the changes, which came into effect on March 1, will negatively impact them and their families. The community says they have been requesting a meeting with the Area Representative, who is also the Minister responsible for fisheries, but the efforts have been futile. Today, reporter Vejea Alvarez and videographer Shayanne Dena headed out to La Isla Carinosa to get the story.

Vejea Alvarez, Love FM News: The fishing community of Caye Caulker village is speaking out against regulations they say will jeopardise their way of life. 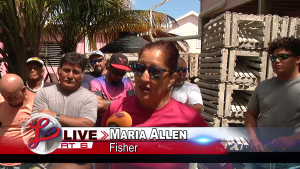 Maria Allen, Fisher: This has been rammed down our throats because what happened is we’ve been trying to have a consultation with Mr. Perez from October, November and we have sent him two letters that we need a meeting with the fishers of Caye Caulker and to no avail. We have not gotten any consultation with him.

Vejea Alvarez, Love FM News: Former fisherwoman of the year, Maria Allen, is spearheading the initiative which over 200 fishers have already signed up for. She says that the new regulations will cut deep into their coffers.

Maria Allen, Fisher: “The 4.5 oz, which is the size of the lobster tail for the new regulations, we do not get these size of lobsters throughout the season. We do get it for the beginning but it will affect us very negatively and I know the fisherman of Caye Caulker, we don’t get these.”

Vejea Alvarez, Love FM News: Carlos Tan has been fishing for over 40 years and he says the cost of operating his vessel has risen every year. He claims that the new amendments to the Lobster Regulations will only make his life as a fisher even harder. 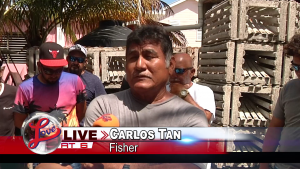 Carlos Tan, Fisher: “Eventually what will happen with that 4.5, our production will go way down half yearly. Say if I produce 500 lbs for the year, I will only produce 250. So that will drastically reduce the, production-wise, I don’t know if I will be able to survive that and with the gas prices so high, how can we manage our fishing industry? It’s pretty hard.”

Vejea Alvarez, Love FM News: Ernesto Marin is another fisher who says he has been working in the area for decades. According to him, the lobsters that prowl in the waters near Caye Caulker use it as a nursery. 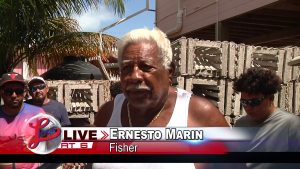 Vejea Alvarez, Love FM News: Boddy Magaña is a 3rd generation seaman who says that the new requirement gap size for escape traps will impact the investment they have already made.

Boddy Magaña, Fisher: Many fishermen, they don’t work only during the lobster season. They work all year round so an investment is being made into the fishing industry, lobster fishing, constantly. Right? And as you can see right here, there’s a lot of lobster traps that are being made, that are being repaired. Does it? Change it? It’s going to take, I mean. It’s already made. You know? They already put the time into it and then for all their investment for years. It’s something that, you’re giving them double work and not just double work, you know. You’re letting them invest in something that will no longer benefit them, something that has, they have been working on for years. You know? And it’s just unfair.”

Vejea Alvarez, Love FM News: Overall, the community says they mainly are requesting an audience with the Minister of Blue Economy, Andre Perez, hoping to reach a compromise which strikes a balance between their economic needs and sustainable fishing. Reporting for Love News, I am Vejea Alvarez.