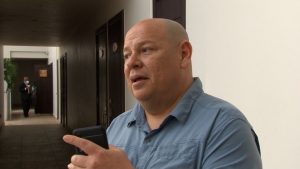 As the CARICOM leaders met today in session in San Pedro Town, there was one media house that faced some challenges outside. Reporter Cherisse Halsall of Channel Seven was removed from the pool area at the Grand Caribe Resort after she reportedly broke the no-access protocol. Halsall ensured that her removal was caught on camera as she informed the police that she will be doing her report and that they can remove her while she does her report. At that point, the police officers attempted to evict her from the premises. The video shows the reporter putting up some resistance as participants of the summit were seen in the background having breakfast. As the officers attempted to physically remove her from the area, the Special Envoy for Women and Children, Rossana Briceno, intervened, instructing the officers not to touch her. With that, Halsall left the area. Since the video made it on social media, the United Democratic Party (UDP) has issued a release condemning the removal of the reporter, indicating that it’s a state sanctioned attack against the press. In addition to Halsall’s removal, the UDP did echo Halsall’s disapproval of a clear media preference that the Briceno administration has shown towards the Ashcroft-owned Channel Five. 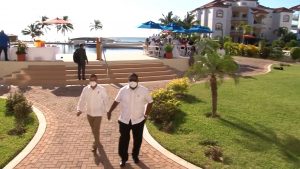 In a live report on Facebook this morning by Halsall she noted that the government has given an all access pass to Channel Five while the other media houses were excluded. The opposition shared this concern, saying, “While this incident was taking place outside, a team from Channel 5 News was inside the resort enjoying full access to meetings and CARICOM government officials. This preferential treatment to News 5 by its former employee, Director Michael Rudon, could have only been possible with the approval of its former CEO, now Ministry of Foreign Affairs CEO Amalia Mai. We warn that state preferred media is just a step away from state-controlled media seen only in countries with oppressive authoritative regimes.” End of quote. The Ministry of Foreign Affairs has since responded to Halsall’s report with a release, indicating that she (Halsall) was in an area where the media was not authorized to be. According to the Ministry, Halsall’s violations began from Monday when she insisted on being in the no-access areas. The release explains that, quote, “on Monday, February 28, 2022, Ms. Cherisse Halsall of Channel 7 arrived at the media room and was reminded of the conditions with access. She left the room claiming she needed to clear her head. Shortly thereafter, the Press Office was informed that she and her cameraman were in a no-access area. Ms. Halsall falsely told personnel there that she had gotten permission from the CARICOM Secretariat. She had not. She threatened that if she was removed she would cause a scene, and was verbally abusive to security personnel there, including the head of the Belize Defence Force detail. The decision was made to allow the Channel 7 team to record the arrivals. On Tuesday, March 1, 2022, Ms. Halsall arrived at the breakfast area, which she knew was a no-access zone for the media. Heads of Government, Foreign Ministers and officials were holding bilateral meetings during breakfast which was set out around the swimming pool. Media personnel, both local and regional, were informed that they could not conduct interviews in that area and left without incident. Ms. Halsall was asked to leave and refused again, threatening to cause a scene. Security personnel removed her. The video being aired by Channel 7 shows clearly that Ms. Halsall was at the pool area – a no-media area. Despite that incident, Channel 7’s cameraman was allowed full access to the opening session of the Summit, as had been promised to all media houses. The claim by Channel 7 that their media house was muzzled is false. They were and will be allowed the same access as all other media houses, local and regional, with no exceptions. The Ministry of Foreign Affairs, Foreign Trade & Immigration regrets the decision by Channel 7 to play victim and cry foul with extreme sensationalism. In Belize, as in every region of the world, there are rules and protocols which govern meetings of this type. Regrettably, Channel 7 chose to blatantly ignore the rules and use freedom of the press as justification. We reiterate that members of the media are present at the Summit and will have full access to the delegates in areas and at times specified.” End of quote. 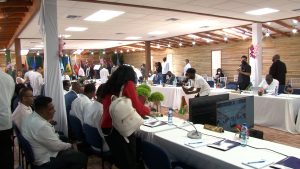 Up to last Wednesday our newsroom was told that the local media would not be allowed at the summit. That decision, however, was reconsidered and on Friday we were given permission to attend. As for the exclusive broadcast contract with Channel Five, the release from the Ministry of Foreign Affairs did not comment.