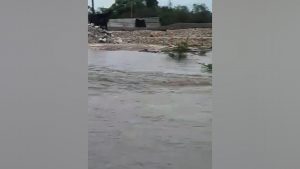 Last week two locations along the Coastal Highway, namely, Quamina Bridge and Big Creek Bridge, were inundated by intense rainfall. This resulted in some delays for motorists using the Coastal Highway. Construction works are ongoing, with at least 12 months remaining under the contract. To facilitate the construction of the bridges, roadside drains were intentionally blocked to dewater the bridge construction site, causing both areas to be inundated. Engineer Coordinating at the ministry Evandale Moody told Love News that the water has receded as the drains are now temporarily opened to release floodwaters.
Evandale Moody, Engineering Coordinator, Ministry of Infrastructure Development and Housing: “We are doing approximately 6 new bridges and rehabilitating 4, we are also upgrading 56 kilometers of road. As you know the Coastal Highway basically links to South from Democracia to Hope Creek Village where it intersects the Hummingbird Highway and so the scope of works on the Coastal Highway is basically spread through the entire 56 kilometers of road so we have the contractor working at various locations along the site. Based on the timing that I’ve indicated we approximately 70% completed based on the scope of work that we have to implement and in respect to the bridges we are averaging somewhere around 75% in respect of the bridges. What basically transpired on Friday is that we had some torrential rain in the south and that rain occurred in an area near by Gales Point Village and that is the area where we are building two bridges at this point in time one is the Camino Bridge and the other is Big Creek. So at the Camino bridge we had the drains blocked in an effort to deep water that area for us to construct the bridges and so as you know we are in the dry season and we didn’t expect that we would have such rain following up on us on Friday but in any event we had to mobilize the contractor to open those drains that we had intentionally blocked in an effort to de-water that area. The same thing occurred at Big Creek where we also building a new structure there. We had a diversion as well located near the Big Creek bridge itself because we are building that new structure on line and so we had to construct a diversion in an effort to make sure that we have traffic passable at all given point in time but what basically transpired is that that diversion was blocked by an articulated vehicle that basically run off the diversion and into the drain and created that problem for us at the Big Creek location.”

The Ministry requests that motorists exercise due care and attention when traversing the 56 kilometres of the highway as several locations remain under construction. 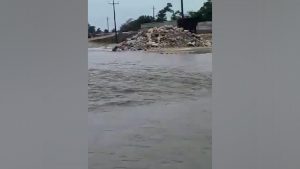